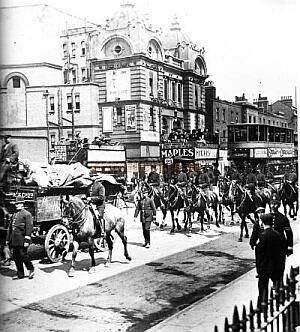 The New Prince’s Theatre opened as a music hall theatre on 26th December 1905. Located in the east London district of Poplar, on the north side of East India Dock Road at the corner of Stansby Street, where in modern times stands Canton Street.

It was operated initally operated by Clarence Sounes and was designed by noted theatre architectural firm Owen & Ward of Birmingham. The building had a 60 feet wide facade, that was in an English Baroque style, in brick, with Hathernware terracotta trimmings. Seating was provided in Orchestra Stalls and Pit areas, a Dress Circle, a Balcony and a Gallery/Amphitheatre. Decorated in a French Renaissance style by decorators F. De Jong & Co. with a colour scheme of cream and gold, relieved with pale salmon and blue. There were painted panels above the proscenium and in the ceiling dome. It was equipped with a 23 feet wide proscenium, a 41 feet deep stage that was 60 feet wide and 17 dressing rooms.

Films were screened as part of the variety programme from the early days. Within a short time of opening the ‘New’ was dropped from the name, and in 1907 it was re-named Poplar Hippodrome Theatre. By the early-1920’s was presenting mainly live performances.

From November 1925, when a new owner Arther Gilbert took over, it was converted into full time cinema use. In July 1926, alterations were carried out by the Pilcher Construction Co. when it announced a re-opening as the new Hippodrome Super Cinema. In 1930 it was taken over by Associated British Cinemas(ABC), but it was still listed as being operated by Arther Gilbert’s Olympodromes Ltd. and underwent further alterations in 1936.

The Poplar Hippodrome Theatre was badly damaged by German bombs in Autumn 1940 when it recieved a direct hit, and never re-opened. The burnt-out shell of the building stood proud on East India Dock Road until 1950, when it was demolished.

Photographs and a brief history of the Poplar Hippdrome Theatre here:
http://www.arthurlloyd.co.uk/Poplar.htm#hippodrome