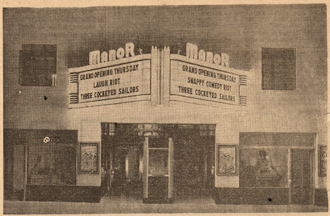 Located in downtown Wilmington on Market Street, the Manor Theatre was one of the two movie houses that were opened in Wilmington’s historic downtown district. The Manor Theatre was opened December 4, 1941 with the British movie “Three Crocketed Sailors” (Sailors Three) staring Tommy Trinder. The theatre closed in 1985. The building became the Rox nightclub.

This was the website for the nightclub, but it no longer works.
http://www.roxwilmington.com/

Finally! Found a photo among my father’s stuff!
View link

Boy,Chuck 1231 that American Classic photo makes it look like a Dry cleaning store.What horrible facelift.I notice a “FOR YOUR EYES ONLY” one sheet on the front of the Manor.

This theatre got a lot of Disney product too.

The MANOR THEATRE opened on December 4,1941 with the main attraction “Three Cocketed Sailors”.

Closed in 1985 under Piedmont Theatres.

Does Wilmington have any historic theatres still in existence and in operation?

That is a very good question Patsy. The last theatres that Downtown Wilmington had that was operational was the Bailey Theatre and the Manor Theatre. The Bailey closed in 1980 and the Manor was gone by early-1985.

I must disagree, Raysson. Thailian Hall (built in 1862) is a VERY historic Wilmington theatre, but it’s not primarily a movie theatre, although films are shown there. My favorite memories of the Manor Theatre were seeing the 40th Anniversary revival of the Marx Brothers “Animal Crackers” there in 1973, “Song Of The South” in 1974, Pink Floyd’s “Live At Pompeii” in 1978, and in 1980, when it had a long run of “The Rocky Horror Picture Show” for the midnight movies.

This was also under the Eastern Federal Theatre chain.