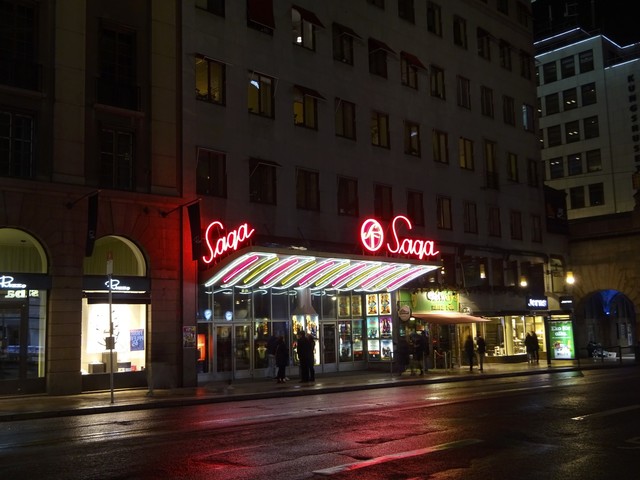 The Saga Cinema opened on 5th February 1937 with 977 seats located in orchestra and balcony levels. Designed in an Art Deco style by architects Adrian Langendal and Erik Hogstrom, with interior decorations by Nordiska Kompaniet.

The Saga was always a ‘Premiere’ cinema and Royalty attended the opening, along with variety star Karl Gerhard, who performed a prologue from the stage. It has a fully glazed facade and originally the canopy was lined with 18 carot gold leaf. The auditorium walls were lined in panels of polished mahogany and lighting was via troughs in the ceiling containing concealed lighting from 900 bulbs. The cinema was equipped with an orchestra pit and a stage. There was also a Hammond organ.

Initially it was operated by Europa Cinemas and was taken over by Svensk Filmindustri in 1985. In 1990, the auditorium was altered by extending the balcony forward to the procenium with a new seating capacity of 588, and it retained its 70mm capability.

Three screens were constructed in the former orchestra level and have been named Anglais, Aveny and Bostock after former Europa Film cinemas in Stockholm. The 115 seat, Anglais has a screen curtain especially made and has a design upon it representing Mayan Aztecs. The Aveny has 83 seats and the Bostock 65 seats.

Here are some circa 1930s theater ads from Life, including the Saga.
http://tinyurl.com/kvqh9e

The Errol Flynn movie is “Dawn Patrol” and the Edward G. Robinson movie is “Bullets or Ballots”. Both from 1938.

sorry above photos should be listed for the Scandia

Exterior and lobby photos from March 2015.