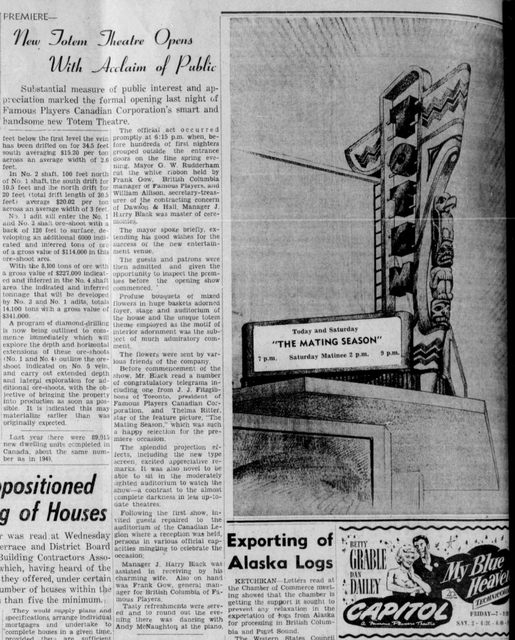 My brother worked at the Totem Theatre and I worked at the Capitol Theatre when we were in our teens. I don’t recall the exact number of seats, but it was between 500-600 seats. They don’t make theatres like this anymore. When ET came out in the theatres, the Totem Theatre would sell out on both showings of ET for months. This was before the VCR and at a time when the popcorn was popped with coconut oil…. those were the days.

The Totem Theatre was located at 200 3rd Avenue West and its postal code was V8J 1L1. It was also a Famous Players theatre throughout its existence (as noted in the article above) and opened on April 12, 1951.

A newspaper article from the April 13, 1951 edition of the Prince Rupert Daily News on the opening of the Totem the previous night is now uploaded to the photo section. The opening night feature was the 1951 Gene Tierney film The Mating Season. More articles announcing the opening of the Totem have also been added to the photo section, including the opening night ad. In the accompanying article, it mentions that the Totem had 640 seats and was prominently decorated with Haida artwork in the lobby and auditorium.