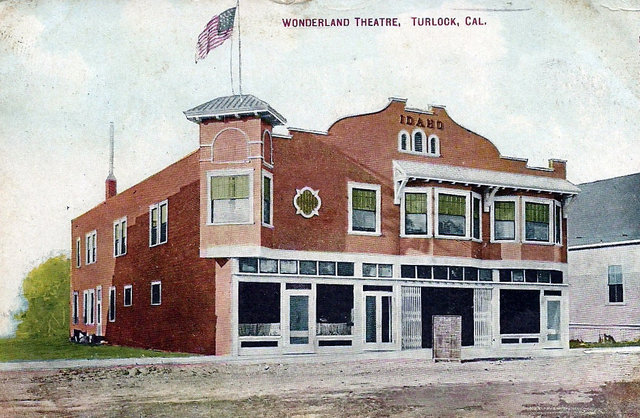 The Modesto Bee said in 1946 that this was Turlock’s “first show house of any consequence”.

Bee archives show that this silent film house was opened on July 4, 1909 by Charles Johnson in the Idaho building.
The 400 steel framed seats with arm rests were shipped from San Francisco for its opening.

It was destroyed by fire on June 22, 1915. The Fresno Bee said in September of 1915 that the theater moved its operations into the old opera house while a new Wonderland was being constructed. No evidence can be found of a new Wonderland being built after the fire, but for a few years after the fire, a Turlock Theatre, address unknown, often placed ads in the Modesto Bee. It took about five years but finally on April 15, 1920, Dick Arakelian opened the New Turlock Theatre near the same address.

From THE MOVING PICTURE WORLD February 5, 1916 New Theater at Turlock, Cal. The new Turlock theater at Turlock, Cal., erected to take the place of the old Wonderland theater destroyed by fire some months ago, was opened the first of the year by George Bailey, proprietor of the former house. The new theater Is of fireproof construction, of very pleasing design, and has a seating capacity of 700 in the main auditorium and 140 in the balcony. The opening attraction was “The Battle Cry of Peace” and this was presented in a very impressive manner, an orchestra having been secured for the occasion. Before the performance commenced Rev. F. M. Brooke delivered an address on preparedness and the meaning of the film that was to follow. The production was well received and capacity houses were the rule during the two-days' engagement.