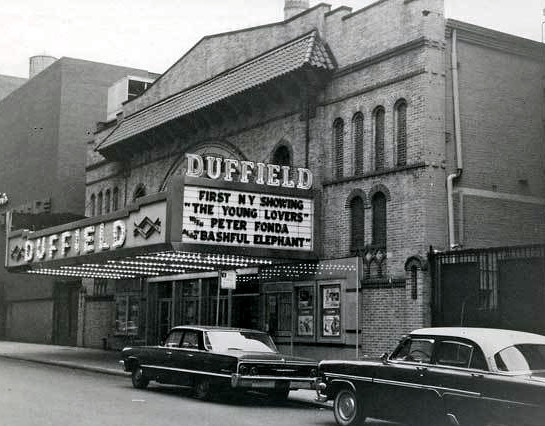 This theatre was one of Fulton Mall’s four movie palaces which included the Loew’s Metropolitan Theatre up the street, the RKO Albee Theatre around the corner, and the Paramount Theatre two streets east.

It remained a single screen until April 20, 1984 when it it was divided into two cinemas separating the balcony from the orchestra section as a twin. Seating was now provided for 350 on the former orchestra level and 304 in the former balcony level. Both cinemas had great sound but it’s cinema life was cut short in 1991 during the screening of “New Jack City” when a patron was killed on March 11, 1991.

The theatre was closed by the NYPD for investigation. It never reopened and was later sold and then demolished.

Today, a building on the site is a gymnasium named Planet Fitness.

Thanks Sap The Rockivlle was the one. Did a google map street view and it shows a for sale sign on it.. At least when i went there you couild not only see but hear the movie without hearing commentaries all through it.

I ageee with many of the others who have commented here. Even though the Duffield was only a few blocks away from the RKO Albee and Loews Metropolitan, it wasn’t in the same universe as those theaters. I saw numerous films at the Albee and Loews Met. from the early to mid-1960s and they were beautiful and memorable theaters. I saw only 1 film at the Duffield “Move Over Darling” with Doris Day and James Garner and, to be honest, neither the film or the theater were very memorable at all. Its a wonder this place lasted as long as it did although, if you think about it, as Downtown Brooklyn went down the drain it was somehow appropriate that the crumbiest theater there should be the one left to symbolize what this area deteriorated into.

Only time I was in this theatre was to see the showcase engagement of Butch Cassidy & the Sundance Kid. A Randforce house, it was not particularly distinguished and didn’t compare to the chain’s other venues including the Savoy, the Commodore or the Alba, and was totally out of league with the downtown flagship heavyweights such as the Fox, the Paramount, the Albee and the Metropolitan.

I saw Edward Scissorhands here one snowy night in 1991. The next night was when the shooting took place as the other screen was showing New Jack City. I thought this was a beautiful old theater. It had a kind of modest grandeur to it.

What is the name of the movie theatre in Downtown Brooklyn, off of Fulton, that is now a Berkley College and Planet Fitness? I thought it was the Duffield

The newcomers to these neighborhoods ‘destroyed’ the civilized fabric of these communities.