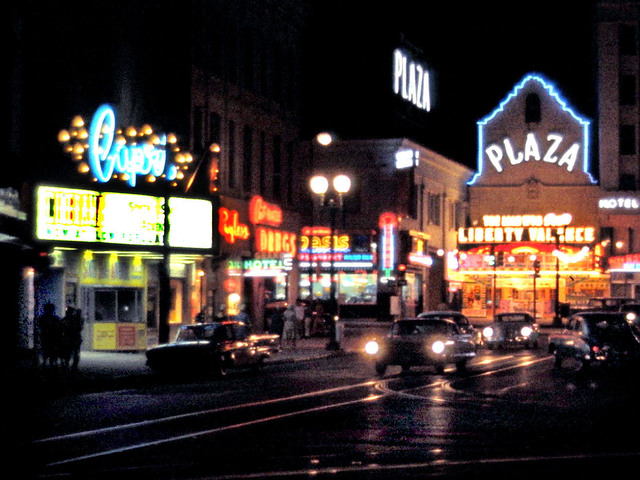 The Plaza Theatre opened September 12, 1930 for movies and stage shows, it had a seating capacity for 2,298. The theatre’s Atmospheric style beauty is equally matched by its glorious Spanish Colonial decor. A truly stunning movie palace, it is one of a handful of theatres that became part of the Save America’s Treasures program.

After decades as an entertainment venue for the city, the Plaza Theatre was narrowly saved from demolition in 1987 by the El Paso Community Foundation who raised $1 million for the theatre’s restoration. The city later took control of the Plaza Theatre and a renovation and restoration project was underway for several years to reopen the theatre.

Assisted by the Save America’s Treasures program, the Plaza Theatre received the help it needed to complete the renovation and reopened March 17 (St. Patrick’s Day), 2006 with a sold-out production of “Riverdance”.

A stunning theatre! One of the best restorations I’ve seen. The Plaza is a gem.

Memories! I worked as an usher and doorman at the Plaza 1950/52.
Was in El Paso about a year ago and took the guided tour which was then held on Tuesday mornings. Very interesting and well worth anyone’s time.
Much of the original interior is still in place. The one thing I noticed missing was a large beautiful painting of a Spanish lady over the stairs leading from the main floor to the mezzanine.
I do not remember the first movie I saw there (1945), but I remember the last move (The Exorcist). We sat in the mezzanine first row…my favorite seat.Movie scared the hell out of my nephew.

Here is an August 1976 article from the El Paso Herald-Post:

A hearing on the eviction notice filed against operators of the Plaza Theater has been set for 8:30 a.m. Thursday before Justice of the Peace Jesus Hernandez. Ted Cottle, realtor representing Mike Dipp, theater owner, said the notice was filed for failure to pay rent for several months. Tim Cassias, former employee of the Plaza, who has filed claim for back wages with the Texas Department of Labor and Standards, told The Herald-Post he plans to notify film distributors of irregularities in the theater’s bookkeeping. He showed documents which he said support his contention that the distributors were paid less than they were entitled to on certain films shown at the Plaza in 1975.

LANE ROBERTSON, who has headed the Plaza operation since 1973, has denied the accusations and said the documents were stolen from his desk. Cassias admitted yesterday that the papers were stolen but said he did not steal them. He said they were given to him. Both Robertson and Andy Simson said that bookkeeping errors were audit and are being worked out with the the distributors affected.

CASSIAS WORKED for the theater 14 months. He resigned June 29 after being unable to collect pay he said was due him. Mrs. Julia Breck, chairman of the theater’s board, said today, “We’re in the process of handling the situation. We are doing the best we can to pull things together.” She is among prominent local persons who Cassias said made substantial investments in the theater operation. A “Save the Plaza” campaign was held, enlisting financial support with the alternative of having the theater razed so the land could be used for other purposes.

Cottle, however, denies that Dipp ever intended to raze the Plaza after buying it in 1973. Cassias said he learned soon, after going to work at the Plaza that the owner did not really intend to raze it. He said the appeal to save the building was a deception to increase the urgency of the appeal for money.

While we’re talking about the Plaza, let’s not neglect the great theater organist John R. Thomas who had a couple of stints as “House Organist” there. His final tenure was from 1965 until his death in 1968. In those days the theater’s management spotlighted the organ for brief programs between features, with the Wurlitzer console rising up out of its pit as the film ended, then descending just in time for the next show. John R. had an incredible talent for using all the sound effects that had been built into the Wurlitzer, in addition to all the organ’s musical resources.

From 1938 an El Paso newsprint photo of William “Hopalong Cassidy” Boyd, Jane Clayton and a crowd of people in front of the Plaza a the gala world premiere of In Old Mexico.

Just returned from a visit to El Paso and was privileged to see “The Magnificent Seven” as part of the El Paso Film Festival, hosted at the theater. None of our party of five had ever been inside and, to say the least, we were simply knocked out by the theater’s beauty. Projection, unfortunately, is not so hot – pretty dim picture, sorry to say. Have noticed this same phenomenon at the Paramount in Austin. Are the projection bulbs used today just not as bright as they used to be?

No they just want to run til they can’t get a light,It is the norm for most second run houses,but this place should be way above the dollar triple down the street.You should mention it,but you would think they would notice.The Bulb might need adjusting too.

1963 photo added courtesy of the Traces Of Texas Facebook page.

I first started working for ABC Theatres as the manager of the Plaza in 1971 (As well as State, Pershing and Northgate). While my experience was less than remarkable until we ran “The Exorcist”. That filled up all the seats and required me to bring in managers with crews from other venues to augment the Plaza crew. This gave me a taste what the theatre was like in it’s heyday. The Plaza was an ornate flagship theatre in the Interstate Circuit. It had a great history perhaps the most prestigious I ever managed aside from the Ziegfeld in Manhattan.