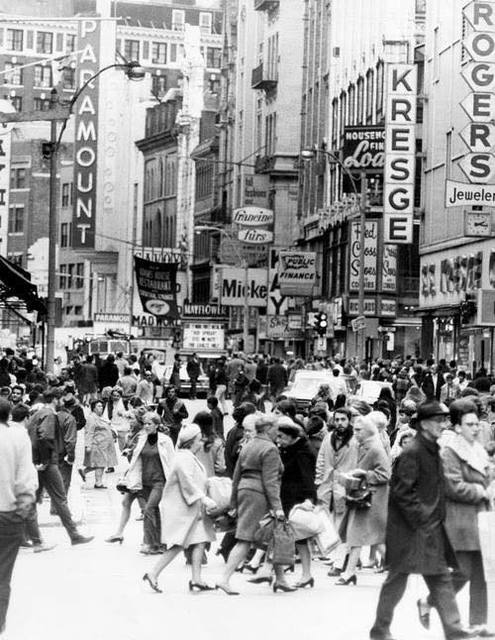 Opened on June 25, 1914 by Boston theater pioneer, Jacob Lourie, the Modern Theatre was the site of the first installed sound projection equipment in the country.

Lourie also introduced a double feature policy here that spread throughout the industry. It was also one of the first movies-only deluxe theaters in New England.

In 1949 its named was changed to Mayflower Theatre. In December 1978, the name was changed back to Modern Theatre, and it began to present live concerts and stage shows such as David Mamet’s “American Buffalo”. This new use only lasted two years, and the Modern Theatre closed for good in May 1981.

The Modern Theatre was demolished in early-2009. Provisions were made to carefully salvage the facade with plans of rebuilding it again onto the modern building which was to constructed on the site. In December 2009, a Boston Herald article reported how 850 pieces had been cleaned and were reassembled in the Spring, 2010, as part of a $42 million project by Suffolk University to create a new 185 seat multi-purpose Modern Theatre, which opened on November 4, 2010. There are also 197 dorm rooms in a 10 story tower built above the new theatre.

Some photos of the fully restored and unveiled faÃ§ade here:

Notably, the theatre has a brand-new (but old-fashioned looking) vertical sign.

Why do these photographers apologize for their work? His photos look great. The vertical sign is very nice, and wasn’t there when I went by not long ago. Notice how the arch is open. This is how it looked originally. But from the time I first knew this facade circa- late-1940s, the arch was all covered and plastered over.

The Modern and neighboring Paramount will be used as venues for First Night on New Year’s Eve, according to HubArts.com.

The new Modern officially opens tomorrow. I have submitted it to CinemaTreasures as a separate page, and will link to it here once they put it up.

The new Modern Theatre now has a CinemaTreasures page of its own. Please use that page for any further discussion of the new theatre.

I edited the description to more accurately describe the theatre’s last two years as a live stage, 1979-81. This Boston Redevelopment Authority report goes into more detail.

The BRA report, published in 2002, says that the Modern’s first live performance, by the musical group Sun Ra and his Arkestra and a light show called â€œSpacescapesâ€, occurred on December 19th, 1978.

It goes on to say:
[quote]The Modern Theatre continued to host less-traditional theater and musical acts, as
well as more mainstream fare, including The Helium Mime Show, GHOST (a
blend of mime, rock music, and slapstick comedy), and the plays â€œSurvivalâ€ and
â€œAmerican Buffaloâ€, the first dramatic play ever at the Modern. There were even
plans to host bands at the Modern Theatre in an effort to compete with more
established clubs such as the Paradise.

By 1980, the theater was still struggling, but there had been 200 performances by
visiting groups and plans were underway for the first full season by the Modern
Theatre itself. Just one year later, however, Archer decided to switch his non-
profit group to a for-profit organization in an effort to attract investors to the
project. He proposed to renovate the top floors of the building into commercial or
condominium space and to build a full-service bar above the main lobby. This
proposal failed and the building was sold in the early 1980s to the Levin Family
Trust, the [then-]current owner.[/quote]
A Boston Globe article published on November 11, 1981, said that “The last time the Modern was lighted was in May [1981] with a mime festival.”

In the Theatre Historical Society archive there is a MGM Theatre Report for the Modern Theatre, 523 Washington St., Boston. The Report says that the theater is in Fair condition, and has 361 seats on the main floor and 339 balcony seats, total: 700. There is an exterior photo taken April 1941. The Modern had a very unusual rectangular marquee with lighted panels for the attractions, rather than lines of letters.

In the Quincy (MA) Patriot Ledger of Sat March 20, 2021, there is a lengthy feature article about Boston’s live theatres during the “pandemic” written by R. Scott Reedy of Metrowest Daily News. He most likely obtained the info and photos in his article from the theatres. Writing about the Modern Theatre and its ancestor, the Modern/ Mayflower, he says that it was originally the 1876 Dobson Building, “a sandstone warehouse designed by Levi Newcomb and Son”. Clarence Blackall rebuilt it into a theatre, adding an elegant Florentine Renaissance white marble facade. As we know, the facade in recent years was taken down in pieces like a gigantic puzzle and re-erected on the present new building. Most of Mr. Reedy’s comments in the article are accurate, and the photos look great !