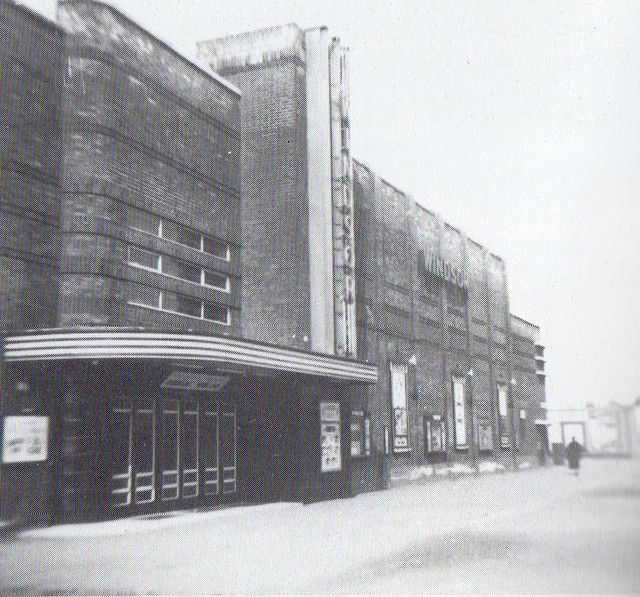 The Windsor Cinema was built on High Road in the Balby district of Doncaster. Opening on 1st August 1938 with Tom Walls and Jane Baxter in “Second Best Bed” & Jack Holt in “Outlaws of the Orient”. The Windsor Cinema was a free standing building with a large free car park for cinema patrons.

A brick built building of ultra modern design the front elevation was in sand-stock facings relieved by three fins carried out in Brizolite with a long canopy over the entrance which was situated to the left hand side of the front façade. The main doors led into a spacious foyer which housed the pay box and doors leading to the stalls seating. A handsome staircase led up to an upper lounge with doors to the circle. The foyer was of fibrous plaster decorated in shades of green with sprayed and stencil work to the walls all lit by concealed lighting. The auditorium, which ran parallel to the main road, was in fibrous plaster in warm shades of reddish brown and blue again lit throughout with concealed lighting. The proscenium was 34 feet wide, a festoon curtain covered the screen and coloured lights were projected onto them. The Windsor Cinema was taken over by the Leeds based Star Cinema Group on 1st March 1954. Improvements were carried out including the installation of CinemaScope. The Windsor Cinema closed as a cinema on 8th November 1962 and operated as a Star Bingo Club which was demolished in September 1964. A petrol station also called ‘The Windsor’ was built on the site. In 2016 the site is occupied by Northgate Vehicle Hire.

The Windsor had a sister Cinema in the Doncaster Area, the Astra on Beckett Road, Wheatley.