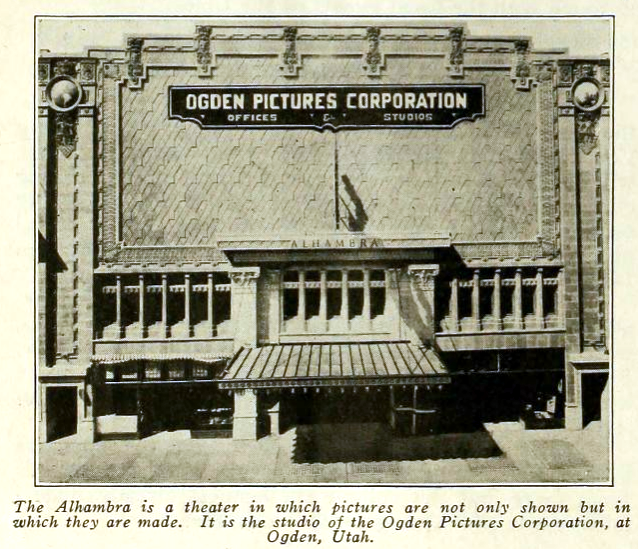 The 2,200-seat Alhambra Theatre opened on March 17, 1915 with a concert by the Ogden Tabernacle Choir. Its first silent film was Charlie Chaplin in “The Champion”. Newspaper accounts on its opening said that the style of architecture, designed by architectural firm Shreeve and Madren, was Sullivanesque. Described as ‘America’s most beautiful Moving Picture Palace’, it was certainly one of the earliest adoptions of the Alhambra name. Huge murals on the side walls represented Song, Drama, Dance & Music. Its advertisements proclaimed “The germ free theater. Fresh air for everyone”. The projection booth was located within the front of the balcony structure rather than at the rear and top, as was the usual placement. This ensured the picture projected straight-on, eliminating any key-stoning and facilitating perfect picture focus.

Building plans were first detailed in a March 26, 1914, article in the Ogden Examiner which said that it was to be built on property purchased by Fred J. Kiesel, an early Ogden developer. The steel framed structure was planned to be 180' in depth and 65' wide with four stores in front. A month later it was announced that The Alhambra Theatre Company had purchased the property from Kiesel and the theater was to cost $150,000 and seat 1,826, of which 500 were to be in the balcony. The company also operated the local Isis, Oracle and Globe theaters. Other venues in town at the time were the Ogden Theatre and Orpheum Theatre. The company said the showhouse was to be similar to their American Theatre in Salt Lake City.

A May 15, 1915, article in the Examiner said that a suit was being brought by the Ogden Theatre against Paramount Pictures for selling films to the Alhambra Theatre that the Ogden Theatre had already contracted to play. Paramount’s defense was that the contracts had expired in April and that they were free to sell the pictures to other parties.

Boxing matches were a staple at the early Alhambra Theatre. One notable match took place on May 3, 1916 between two Utahans. A crowd of 2,000 saw an up-and-comer named Jack Dempsey defeat Terry Kelly in ten rounds.

In 1923, A.L. Glasmann, co-publisher of Ogden’s daily newspaper and operator of the nearby Orpheum Theatre, purchased the Alhambra Theatre. Ticket prices were immediately reduced to 10 cents for matinees and 20 cents for evening shows. During summer months Orpheum vaudeville moved to the Alhambra Theatre to take advantage of the latter’s air conditioning. In 1925, the Alhambra Theatre was leased by Publix Theatres and renamed Paramount Theatre. It underwent a complete renovation and seating was reduced to 1,900. One of its premiere attractions was Cecil B. DeMille’s “The Ten Commandments”. By 1927 the theatre was under the direction of Brooklyn-born Louis Marcus, who also owned major theaters in Salt Lake City, including the Capitol Theatre, and other theaters in Idaho. Fanchon & Marco “Ideas” supplemented the screen attractions at the Paramount Theatre. With the demise of the American Theatre in Salt Lake City in 1929, the Paramount Theatre boasted being Utah’s largest theatre. In 1929 Marcus said he was selling his interest to Publix Theaters and retiring from the business. He was elected mayor of Salt Lake from 1932-1936 and died in 1939.

In 1934 it came under the ownership Paramor Theatres who also operated the Orpheum Theatre, Lyceum Theatre and Colonial Theatre. The local Ogden Theatre was an independent.

A major redecoration happened in 1948 with the installation of 1,600 streamlined seats, drapery and a new screen. The stage facilities were also remodeled in order to bring in big band attractions.

By the early-1950’s the Paramount Theatre had again been taken over by the Glasmann’s via their Paramor Theatres corporate name. In July of 1954, Paramor Theatres completed renovations to the plans of Ogden based architect Keith Wilcox, which gave it all new seating and a 42' by 21' screen. In time for Christmas 1954, a new marquee and Paramount vertical sign in addition to a new Formica snack bar was added. Interior and exterior photos of the new theater were in the local paper on December 24 and on the marquee was Paramount Pictures first Vista-Vision movie, “White Christmas” staring Bing Crosby. The Paramount Theatre began to feel stiff competition from the area’s five drive-in’s, which forced it close down in summer months. Even when it was up and operating, it was dependent on low-budget horror and exploitation films, and move-overs from the Orpheum Theatre.

After April 14, 1963, their regular advertisement vanished from the papers. The Paramount Theatre showed up from time to time in the news as the host of community events or a weekly retrospect of MGM musicals but it appears they were basically closed. Later coverage of the Paramount Theatre is sparse but a March 8, 1971 article in the Standard-Examiner referred to the recently razed Alhambra/Paramount Theatre but gave no specific details other than some of its fixtures were donated to a local community theater which was being opened at another location and was using the Alhambra name. Ironically, the site of the Paramount Theatre is a parking lot directly behind the magnificently restored Peery’s Egyptian Theatre.

In June of 2007, movies finally returned to Kiesel Avenue in the form of Larry H. Miller’s MegaPlex 13 at the Junction, which is about a block away from the parking lot where the old Paramount Theatre stood.