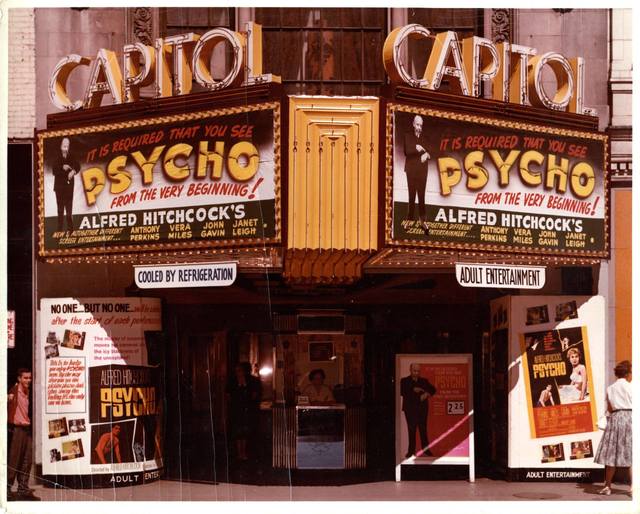 Famous Players last ran this theater, which closed in 2002. The Capitol was demolished in September 2006.

The main point of the above posts is how a once great downtown lost most of the magic needed to be a real downtown.It was overseen by one man more than any other.He and many others have let London down!BIG TIME!

Hello Lost Memory!Yes indeed it is whats left of the Capitol.The new owner who demolished the auditorium wants to destroy the facade as well and so he lets it sit there and decay.Before the demolition he called the Capitol an eyesore but over a year later it looks even worse.

Intact behind the white metal is a wonderful terra cotta stone and windows with curtains still hanging!It was covered over in 1976.

Captain Crunch. The city of London has been not very fortunate. Maybe TG can take credit for the “ongoing of the city (sic)” over the last 20 years. There isn’t a thinking person in London who isn’t looking for an explanation for why London sucks so much. London sucks…TG was in charge for 20 years…you do the grade one math. Captain of the Titanic maybe.
POSTED BY: J Murray
gosnell tom gosnell is an idiot!I’ve listened to him numerous times in council, and out.I’ve heard his snide remarks in public'and overheard him in private. tom gosnell serves nobody but himselfand his golfing buddies in the developement industry!
POSTED BY: k jones
Gosnells expertise Gosnell brings “ a wealth of experience, expertise and good practical solutions” to aid the destruction of communities, families, and the White-Anglo-Saxon-Protesant species, or WASPS for short.
POSTED BY: B.J. Rowe

city hall
Capitol theatre
It is very simple,Shmuel Farhi demolished Londons last downtown movie palace 15 months ago,NOT years ago as he likes to say,which sounds like someone else did it!The theatre auditorium was in excellent condition and at least 2 different groups wanted to restore its former glory.This rescue mission was moving forward until Farhi out bid us because he wanted a parking lot.The city could have stepped in to save the Capitol at this point which is normal in other cities.Instead they handed out a demolition permit under condition the facade be preserved.Yes you may destroy 95% but not the 5% we care so much about.So now he offers ownership of this 5% Capitol facade to the city for free but council rejects it.I predict a gap tooth or a facade of the facade in the future.Most Londoners think the Capitol is still 100% reopening soon so a gap tooth solution might make them think we have a growing sinkhole problem downtown!We cant have that.Poor city council,what to do?

You are the best! Lost Memory!

Here is a new and topical letter to the Editor!
Detroit got it right
Regarding Em touts Chrysler in Super Bowl ad ( lfpress.com,Feb. 7), Eminem doesn’t just park outside “a theatre” displaying the message “Keep Detroit Beautiful.” That theatre is the Fox.

The Fox is a cousin to London’s Capitol Theatre, demolished to make way for a parking lot. Both theatres were designed by the renown theatre architect C. Howard Crane.

There is something very telling in the fact that Detroit, known for urban decay, a declining population and a shrinking tax base, was able to save the Fox and its magnificent hall while London lost the Capitol, except for a bit of the facade. We don’t even have the marquee left to post the message “Keep London Beautiful.”

Bonanza of old photos added, via Barb Trudell Dunbar (daughter of Bill Trudell) one time manager of the Capitol. All found on the Vintage London, Ontario Facebook page.