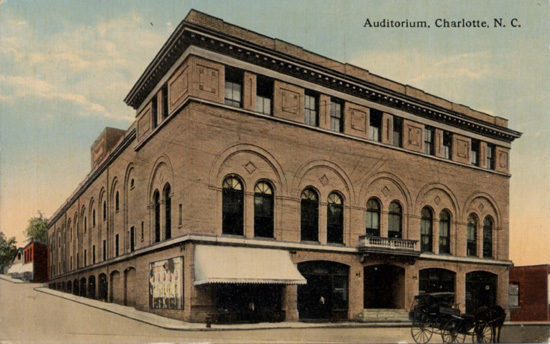 The Auditorium was a multi-purpose space at the corner of Fifth and College Streets, and dates back to probably the late 1800’s. It was very large with some reports putting the seating count at over 4000. It was a bare bones style structure as photos of the interior show. It was in the same block as the Carolina Theater and the two were open at the same time for a brief period in the late 20’s. By the 30’s the theater was dismantled and moved to the west side of town. It was reconstructed into a church structure know as the Garr Auditorium and it currently stands closed and decaying on Tuckasegee Road in the Wesley Heights neighborhood.

The really big movies played at the auditorium after the Academy of Music burned in 1922. Highlights included ‘The Huntchback of Notre Dame’ in January ‘24, 'The Ten Commandments’ in December ‘24, 'The Big Parade’ in January ‘26, 'Ben-Hur’ in September ‘26, 'Beau Geste’ in January ‘27 and 'King of Kings’ in March ‘28.

Along with the movies that played here the following entertainers appeared on stage: John Phillips Sousa in 1922 & ‘24, Anna Pavlova in '22, Paderewski in '23 and Will Rogers in '26.

The Auditorium was opened in 1908 for the Democratic State Convention and was by architect L.L. Hunter. It was dismantled and moved to its current location in 1932. Its original capacity was 4500 including a balcony and gallery but the main floor was probably movable seats to accommodate a variety of different style events.

The Garr Auditorium that was built out of the salvage of the old Charlotte Auditorium is currently being demolished. It has been vacant since Hurricane Hugo opened up parts of the roof in 1989. The city has forced the demolition after it was determined that the structure was too far gone to save.