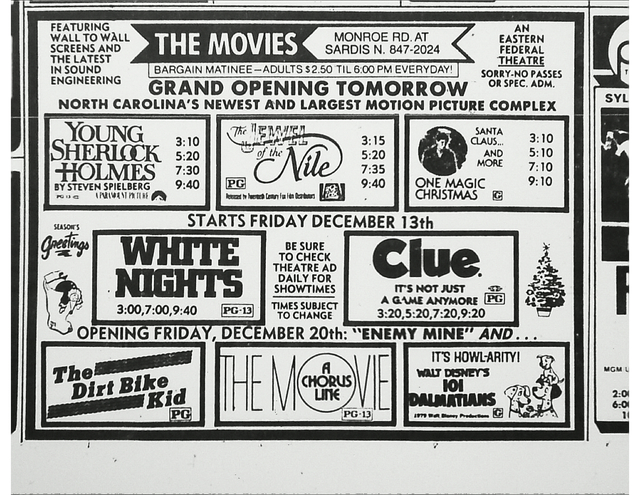 Originally opened December 13, 1985 by Eastern Federal Theatres, as an 8-screen theatre, known as Movies at Sardis North. In 2000 it was expanded to 12 screens. This was the only area theater that Regal Entertainment had to sell off during the recent acquisitions of both Charlottte based Eastern Federal Theatres and Consolidated Theater chains. On March 23, 2016 it was taken over by Cinemark.

Originally know as the Movies at Sardis when it was run by Eastern Federal. It started life as an 8 sceen complex.

Owned and operated by Carolina Cinemas,which also owns and operated the Hollywood Theatres in Asheville,and the Raleigh Grande Cinemas in Raleigh.

When this multiplex was Eastern Federal’s Movies at Crown Point, the expansion to 12 screens was designed by the Alpharetta, Georgia, architectural firm Hiscutt & Associates. There are three small photos on the firm’s web site.

Opened on December 13,1985 under Eastern Federal Theatres as an 8 screen complex as the Movies at Sardis North. Expanded to 12 screens and added all stadium seating and Dobly digital sound in 2000 when the name changed to Movies at Crownpoint 12. Regal Cinemas took over operations from 2005-2009 after its acquisition of Eastern Federal. Carolina Cinemas now operates this theatre.

Effective March 23, 2016, this location is now a Cinemark property.

This opened as simply “The Movies” on December 13th, 1985 and renamed Movies at Sardis on November 15th, 1991 to avoid confusion with the upcoming Movies at the Lakes in Pineville. more to come.