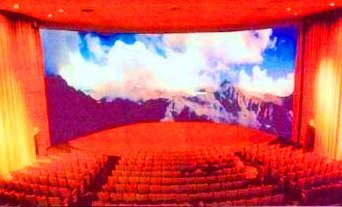 The Indian Hills Theatre was designed by architect Richard L. Crowther for Cooper Foundation and was one of just a handful of theatres designed especially for 3-strip Cinerama in the 1960’s. It debuted on December 21, 1962 with Laurence Harvey in “The Wonderful World of the Brothers Grimm”. It featured a 105-foot wide screen (the largest in the US). In 1977 a second screen named Cameo Theatre was built and opened adjacent to the main theatre. Under later management two more screens were built adjacent to the main one.

Carmike Cinemas closed the Indian Hills Theatre in October, 2000, as it was supposedly one of many under-performing theatres the chain was forced to shed. Unfortunately, the theatre was just months away from completing a major renovation that included new seats, drapery, and an SDDS/DTS-capable sound system.

Efforts to restore the theatre back to its Cinerama roots with a 70mm projector were unsuccesful when Methodist Health Systems purchased the theatre. Announcing in June, 2001 that the building would cost over $1 million to renovate, Methodist decided to demolish the theatre despite numerous protests from all over the world and from such luminaries as Leonard Maltin, Charlton Heston, Janet Leigh, Ray Bradbury and many more. It was demolished on August 20, 2001 for a parking lot.

The Indian Hills Theatre was not only an Omaha landmark, but a treasured reminder of the architecture of the time and the exuberance that such technology inspired in the 1960’s.

Three generations of my family worked at Indian Hills. I still can’t believe it’s gone, even after all this time. I drive past that empty parking lot all the time and try to imagine it there again. My grandfather worked for the Omaha projectionist union back in the 60s and spent time at Indian Hills. My dad and his brother both worked there as an usher and projectionist. In 1997 I was promoted by First International Theaters and moved to Omaha as Indian Hills Asst Manager. First International sold to Carmike Cinemas, and I moved to the Orchard Theater. My younger brother took my place as Indian Hills Asst Manager. Ironically enough, my uncle on my moms side is a security guard for Methodist Health System. If watch the Preserve Me A Seat trailer, he’s the officer/guard that is escorting someone and putting his hand up to the camera. Just doing his job, but embarassing none the less.

Since I have a set of blue prints to the Cooper Cinerama Theater in Minneapolis which is the same building as the Indian Hills I have been looking for interest in building this again. Now that the Cinerama Dome in Hollywood is doing cinerama festivals each fall and Seattle has done some in the recent years. maybe a group of interested people could get the funds to make this happen again.
I worked as an usher in the Minneapolis Cooper during the mid 60’s.
I would love to see this type of building raise again.
MHeaton

Part two of previous email: The Dome in Hollywood was not originally built for three projectors. They had to remodel to get that set-up. They also have a 35mm/70mm projection system in order to run other types of features. In this day and age there would probably need to be a multiplex attached to run other films to help bring the crowd in. However, there are a lot of Cinerama fans around the country – Each year for the last 8 years when there is a festival at the Dome the theater is full each performance to be able to watch that huge picture and fantastic sound system.
By the way, the Cooper’s (all three including the Indian Hills) had tjhelargest screens in the world. More square footage thatn Imax.

Both grand opening ads has been posted here.

8601 West Dodge Road, 393 – 5555. Two screens. (The smaller auditorium is called the Cameo.) Tickets are $2 for showings that start before 6 p.m., otherwise $4 except $2 for those younger than 14 or older than 59. Matinees on weekends and major holidays, and during summer and winter school vacations."

My all-time favorite theater. Right down the street from where I lived as a teen on 84th st. Saw Alien there on opening day 5/25/1979. The Shining on 6/13/1980. Wonderfully huge screen, great seating. An icon lost forever.

I have three Cinerama projectors and a Cinerama sound reproducer like the ones that were installed at the three Cooper Cinerama Theaters during the three-strip Cinerama days. If anybody would like to see them, please contact me at . I would be happy to show them to you. Or, I’ll be happy to send photographs to you.

Archived article reissued in January 2014 about Cinerama at Indian Hills with multiple images.

Opened with “The wonderful World of the Brothers Grimm” and “In search of the castaways”.