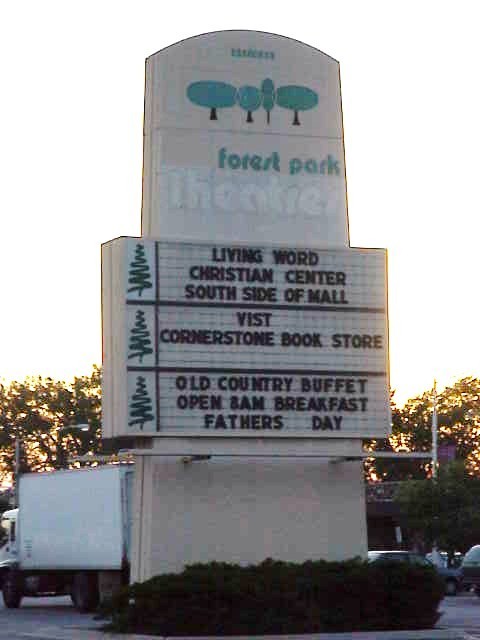 The Forest Park Mall Cinemas opened December 17, 1982 by Essaness Theaters. In 1986 Plitt theaters took over the theatre, and soon after Cineplex Odeon took it over. The theatre began to show second run movies in 1991.

The theatre closed after only ten years of being in use in 1992.

The theatre was finally demolished in 2001, and is now the site of a church.

My only vivid memory of this place was seeing Transformers the movie there. I also remember it being shuttered around thetime I started high school and staying vacant for almost 10 years. A ministry purchased the theater space finally and eventually the entire mall. Funny thing is I work as a program screener for one of the stations in town and one of the religous programs we run (Bill Winston) is the very one who bought the theater and the mall. They show the outside of the theater structure at the beginning (it has been radically remodeled inside and out) and though I don’t remember how the theater was laid out, I bet they made all 3 auditoriums into one big one where they hold services. Obviously, it was redecorated inside and all new seating was put in. Anyone wondering how the theater looked on the inside, the closest you can come is by checking out Bill Winston’s show!

This was a very nice theatre. The first movie I saw there was “Nightmare on Elm Street”. It had a big auditorum for showing the more popular “hit” movie, and two smaller screens for less popular films. It was a “cozy” place. When it went into “second runs”, and the rest of the mall started to shutter, I knew the end was coming. I tried “ripping off” the logo on one of the interior walls (it was aluminum, and it contained silouttes of 4 trees, no detail, just eliptical looking trees with trunks). I liked it, but I broke it, and cut up my fingers in the process. Today, a church uses the space, and although the entire building wasn’t completely torn down, the vast majority of it was taken down, and rebuilt. It’s a real nice looking church, I must say. This was my favourite cineplex during the time it was around (1983-1993). Today, in addition to the church, the mall has an A.J. Wright, a K-Mart, and an Old Country Buffet. It’s doing pretty good.

A boxoffice item of February, 1983, gave the seating capacity of the Forest Park Theatres 1-2-3 (apparently the name when it opened) as 1,800, with two auditoriums of 500 seats and one of 800. All three were equipped for 70mm projection.

Besides “Cocoon” what other movies were shown in 70MM at the Forest Park?

Before “Cocoon”, “Return of the Jedi” was probably their first 70mm presentation. It may even be their most memorable.

I wish their was pictures of the theater around. My guess is that the entrance was similar to Chicago Ridge, another Essaness theater that opened a year earlier.

Don’t quote me on this yet, but “The Right Stuff” may have been shown here in 70mm.

The theater closed after there was a huge fight in the lobby. I believe when the movie “Colors” was played. Candy counters were smashed and there was one teenager that died. After that, business went down and they didn’t stay open much longer. Courtesy and Venture closed not too long after and the mall became pretty desolate. I started working at a clothing store that used to be in the mall and it was kind of errie because the theater was closed but we had access to that and the food court and everything was the same, just empty.

I had the honor to have a close association and fond memories of the Forest Park theater. Kis78 has an “interesting” tale as his comment, but very little or none of this story (as far as I am aware) is true. I know that his story has nothing to do with the theater closing, beyond that… I don’t know. Colors was shown way before the closing and was the cause of some controversy, but I was never aware that the theater was impacted by the feelings the film generated..

The truth of the matter is far less “colorful.” The closing was due to an anti-monopoly law (I’m not sure if it was law in place just in Illinois or if the law even still exists) The law said that a theater chain could not built in two different complexes within ten miles of one-another. Little did any one know that Cineplex Odeon (the dreaded Garth Drabinsky company) that had taken over Plitt/Essaness Forest Park Theater had arranged to build a new theater complex in an upcoming expansion/renovation of the North Riverside Mall. So, the theater company was just biding it’s time waiting for the N. Riverside Mall to undergo its expansion.

The North Riverside theater (owned by another company but part of the reason a second Cineplex Odeon Theater could not be built while The Forest Park Theater existed) died a quick death. I forget the time line, but I don’t know if it ever went head to head with the new mega North Riverside Cineplex Odeon) that eventually sprung to life that forced the closing of the theater due to the possible monopoly violation.

On another note, I am glad that someone mentioned about Return of the Jedi. This film opened the theater on all three screens and ran twenty four hours generating huge crowds to see the opening screenings of the “last” of the Star Wars Saga.

A few little known Forest Park Theater facts: **If you look at Disney films from the 80s, you will see that most of them were financed through a series of limited partnerships call Silver Screen Partners. Silver Screen = (Alan) Silverman and Silverman = S&S = Essaness = Forest Park Theaters original owner along with a series of other theaters under the Essaness name. Essaness, along with the Plitt theaters chains was taken over by Garth Drabinsky. Garth Drabinsky made his wealth by financing the film Platoon along with other projects. Garth went down in flames as he was caught in some unsavory business practices and later sold some of the asserts/theaters to Universal Studios. Another tale of monopoly avoidance I won’t tell here.

**A huge film favorite of mine is Ferris Bueller’s Day Off. The film was not only shot in Chicago, but premiered at no other than… The Forest Park Theater! The late John Hughes was the films writer and director, but earlier in his life he did a stint as a film projectionist.

He insisted on having the sound mix for theater #1 re calibrated for the premiere. A sound man came in wearing ear muffs! Hours before the preview, the sound tech came in, they started the film in the empty theater, he removed his ear muffs and shortly put them back on. He walked the stairs to the projection booth, adjusted a couple of levels on a mixing board. He then went back down, took off his magic muffs, listened for a minute, put the muffs back on and smiled while nodding approvingly. What more can I say… the sound mix was astounding!

The invited guests entered the theater that evening to preview the film. Upstairs, John Hughes threaded up his film and started the projector unavailing his comedy to the world.

Later, I found out that it was a good luck tradition for John Hughes to operate the projector for the first preview screening of his films.

That sound mix carried Theater #1 through films like Romancing the Stone whose image and sound were spectacular. Star Trek IV lit the screen up as well and was once again incredible in sound and film presentation.

Theater #2 was used for the first theater test of video projection. The idea was to rent (four wall) the theater and present projected video concerts, lectures, etc. People just did not “get it” so the experiment was a failure. The equipment was sold. Today, we know that the failed experiment was at least 15 years ahead of its time as we are now seeing live and recorded Broadway shows presented in movie theaters as well as corporate rallies.

The video technology was considered a big “secret” at the time. I’m not making this up, but there was guards posted so that “spies” could not peek at the technology. The secret I was told at the time was that the video projector used heated oils to allow the projection of the electronic image. The video image was not that spectacular, but the audio was outstanding as that theater had a top notch sound system. Theater #3 was a mono sound theater lacking all frills.

Sorry to get so long winded. I feel blessed to know that a few other people were aware that the Forest Park Theater was a hidden treasure not only for our ears and eyes, but for fond memories as well.

This opened on December 17th, 1982. Grand opening ad in the photo section.