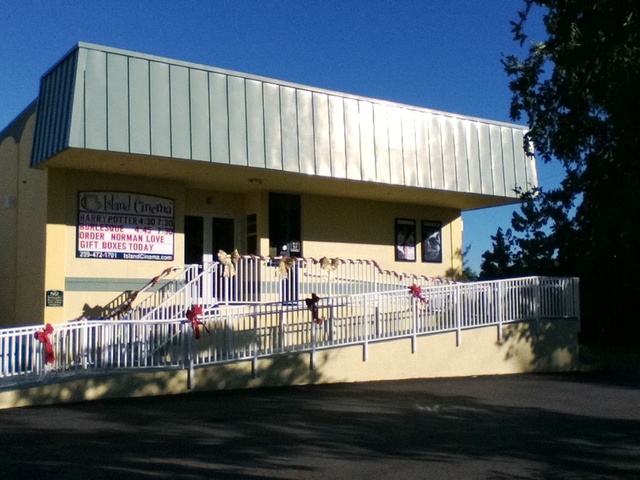 Originally opened as a single screen on March 24, 1972 as part of the Jerry Lewis Cinemas franchise. The Island Cinemas was reopened in December 2008, following an extensive 5-months renovation. Under the new ownership of the Bacik family, new leather extra wide rocking seats have been installed in the two screens, which now each seat 60 persons. A new digital projector, surround sound speakers and air conditioning have also been installed. It was closed on March 17, 202 due to the Covid-19 pandemic. In June 2021 it was announced that the Island Cinemas would be demolished.

The Island Cinema opened as single screen during the early 1980s and was later converted to a twin by splitting the auditorium down the center. The architectural design is functional and non-descript. The facility is very clean and comfortable with the closest completion 14 miles away on the mainland. Photos from December 2010: 1, 2
Island Cinema Official Site

This cinema was initially part of the Jerry Lewis Cinema chain and opened in 1972.

The theater closed in March 2020 as a result of the pandemic, and never reopened. In June 2021, it was announced that the theater would be demolished to make way for an expansion project for a nearby grocery store.