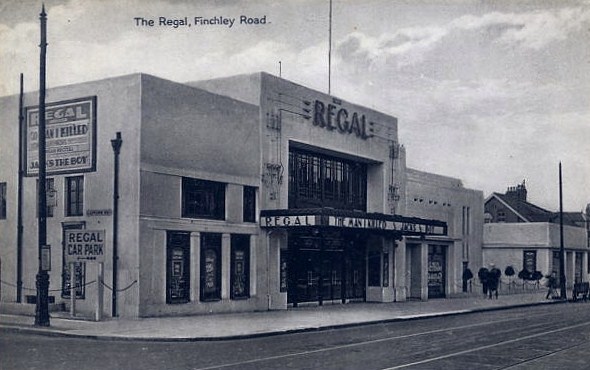 Located on Finchley Road, to the south of Golders Green in north-west London. Originally built as an ice skating rink, it was taken over by the County Cinemas circuit in 1932, and they employed architect Robert Cromie to convert the interior of building into a cinema. The Regal Cinema opened on 18th September 1932.

Seating was provided for 2,218 on a single floor. It was equipped with a 2Manual/6Rank Wurlitzer organ which was opened by organist Reginald Foort. The Regal Cinema also had a cafe and ballroom attached. In September 1939, County Cinemas were taken over by Oscar Deutsch’s Odeon Theatres Ltd., although the Regal name remained throughout its life. The nearby Orpheum Theatre, at Temple Fortune (also part of the County Cinemas circuit) was taken over by Odeon and re-named Odeon Temple Fortune.

The Regal Cinema was an early closure, the final programme was the double bill; Victor Mature in "The Sharkfighters" and Rory Calhoun in "Flight to Hong Kong", on 1st December 1956. The building lay empty for a while, and was converted into a Top Rank Bowl, catering to the new craze of 10 pin bowling, which opened in March 1960.

Bowling was only a short live fad, but this bowl operated until 1970, when it was closed. The building began use as office space for Bruno Newton in October 1971. It was demolished in February/March 1996 and offices were built on the site.

Here is a September 1949 photograph of the Regal Cinema, playing the Odeon release:
View link

Which of the London Regal cinemas is this one?
View link

Seymour; Great photo of the Regal Theatre/later Odeon, Marble Arch, now demolished and not to be confused with the current open Odeon Marble Arch, which is also on this site.

I remember this cinema from when I was small and we lived around the corner. What I loved were the coloured lights in the ceiling. As the building used to be an ice rink these might well have been the compartment battens originally designed to flood the ice with changeable colours. It may have been an economy to keep these and just illuminate all of them as house lights. The cinema was reputed to have the longest ‘throw’ from the projection room to the screen of any cinema in the UK. I was very sad when I heard that it was closing.

This was on my bus route home from school and I sometimes broke my journey to see a film. I recall Scott of the Antarctic, and The Prisoner with Alec Guinness.

Granada TV have sought planning permission from Hendon Council to use the Regal Finchley Road NW for studios and offices. The application has been granted on condition that no more than twenty people are employed there at night between 11.30 pm and 8 am and the premises are not used in any manner which in the opinion of the planning sub-committee “is detrimental to the amenities of the locality”. The outside of the building will be unaltered.