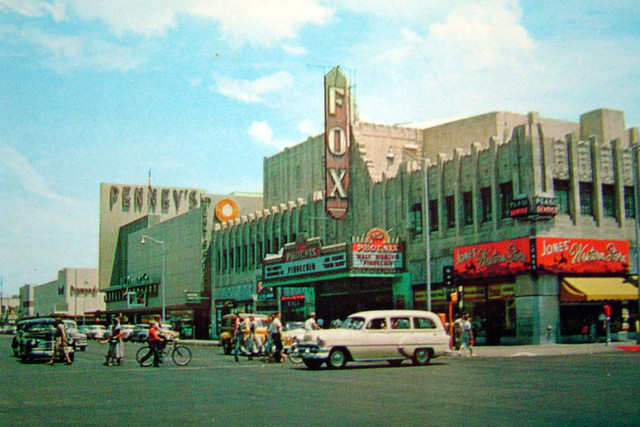 Opened in July 30, 1931, this was one of S. Charles Lee’s largest and most elaborate creations in the sharp-edged, abstract zig-zag Moderne style.

A special feature in its lobby was the row of streetlights alongside the staircase, topped with glass disks and spun in silver globes on the end of 15-foot uprights, outlined by the delicate filigree of the metal railing.

In the auditorium, a metalic sunburst spread across the ceiling from the radiating acoustic frames of the proscenium arch. The organ grills were silverleafed with gold highlights. 0n the side wall an archer takes aim at a gazelle, while birds fly overhead.

Jewel-like lanterns composed of geometrically shaped glass panes hang from the ceiling. Across the opposite sidewall, mythical gazelle-like creatures romp in the abstract landscape. Sunbursts top the scalloped border of the scene at the top of the wall. Angular Deco style pilasters interrupt the wall surface. A pair of leaping gazelles can also be seen above the proscenium. The fire curtain displayed an abstracted version of the Arizona desert landscape.

Sadly, the Fox Phoenix Theatre was ground to dust during its demolition in 1975.

Wallace and Ladmo stage shows here were the best. I still have the empty Ladmo bag I won here in 1963! One of my favorite memories if The Fox was seeing The Beatles movies A Hard Day’s Night and Help there. As The Beatles never did a concert in Phoenix, it was about the closest you could get. We camped outside the theatre the night before Help opened so we could get the best seats. KRIZ even had commemorative tickets printed for the event.

I’d like to address the ‘lack of caring’ posts on the part of Phoenicians about their past. As a native Arizonan and Phoenician I can say without a doubt that we care deeply about our past and hate seeing it bulldozed so carelessly; unfortunately, Arizonans and Phoenicians are in the minority when it comes to who lives and works here. Phoenix is very much a transient city. Few people are from Phoenix who actually live in Phoenix. People come from all around the country and move in with little to no ties to our state or city.

What happened to the Cine-Capri is an excellent example. There was a HUGE outcry among those of us who remember the Cine-Capri and stood in line for three hours to see Star Wars (because that was the only theater it was showing at). Buisness interests from outside the state and council members from Indiana and Iowa representing the district the Cine-Capri was in pushed the demolition through since they had no past history with the establishment. Neither did the residents in the area who saw it as an eyesore and had never seen a movie there as they just moved here from another state. The Kachina went through similiar turmoil.

My mother worked at the Fox in the fourties and was part of the small fight to save it. That was simply short-sighted councilmen. The wholesale destruction that has happened since then has been wrought by people who grew up in other states. They have no ‘skin in the game’ so to speak. Is it our fault for electing them? Sure, but as I said people with a past here are in the minority.

I live in Tucson now and am thankful we don’t have near the out of town/state issues that Phoenix has. We fought hard to restore our Fox and I and many others I know support it financially and by volunteering.

If you move here from out of state, become vested in Arizona: patronize local businesses, find out about the history, go sight seeing, hike, bike, support local sports venues. We need our historic places just like you need yours wherever you’re from.

Was a nice looking theatre.

What ever happened to the wonderful black and white photos of the old Fox on the web? I cannot find them anywhere now? It used to be on this website, but now it will not open: http://acmeron.com/puhs/puhs_page_5.htm

What a shame that the Fox was torn down.
What the heck were they thinking?

Many fond memories: I loved it even before we stepped into the theater, that you got to go down the circular ramp into the old J.C.Pennys underground parking garage next door. (gone too) Then a stop at the candy counter. Finally when you stepped into the theater, it was amazing. A wonderland scene of sculpture, paintings and light. I wanted to go sit in the balcony, but my mom said that that was reserved for the “negroes”. I would ask why they got to sit in the best seats in the house.
I got to peek into the projection room one time. What a monstrous and menacing piece of equipment was in that room. A trip to the Fox was a truly special experience for me.

Thank YOU!!! for restoring the link. I was so happy to see the pictures of the Fox…and once again, so sad that it was torn down. Why was nothing done at the time to save it? Who was in charge? I read that the city of Phoenix already owned it. So sad!

Just after the main credits in the film “Psycho” as the camera pans right you can see the Fox Theatre building in the background.

I am Bob Bowman, the ass’t manager of the Fox Phoenix in 1954 standing in front of the theatre in the photo when The Egyptian was making it’s first run “roadshow"engagement. I have many souvenirs from the day the auction of theatre property was held in 1975 and am interested in acquiring more or conversing with others interested in knowing more about the great movie theatres in Phoenix. email:

This makes me so sad, I never knew Fox Phoenix existed. I wish it was still there. What a Beauty!!!

I saw King Solomon’s Mines here in 1950. Great movie, great, fantastic theatre. The politicians who razed it should rot in hell forever.