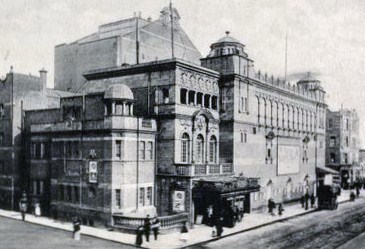 Located in the south-east London district of Peckham. The Crown Theatre opened on 31st October 1898 as a drama theatre with the Wilson Barrrrett Company in “The Sign of the Cross”. In 1898 it presented its first pantomime “Dick Whittington” starring Marie Lloyd, which ren for 2 months. It had an impressive facade, which was in a French Renaissance style. Inside the Grand Circle foyer were painted panels representing the Colonies. The theatre had a 35 feet wide proscenium opening, a 28 feet deep stage and a fully fitted fly-tower.

At the end of 1908 it was re-named Peckham Hippodrome Theatre, becoming a variety theatre and came under the management of Walter Gibbons Circuit. Bioscope presentations were part of the variety programme. In July 1911, it became a full time cinema, known as the Hippodrome Picture Palace. Taken over by the Biocolour Picture Theatres circuit, they were taken over by Gaumont British Theatres in November 1926. Plans were announced that a new cinema was to be built on the site and the Hippodrome Picture Palace was closed in December 1928, ready for demolition.

The Gaumont Palace Cinema was built on the site (it has its own page on Cinema Treasures).

Vintage photographs and a current view of the site can be seen here:
http://www.arthurlloyd.co.uk/PeckhamTheatres.htm