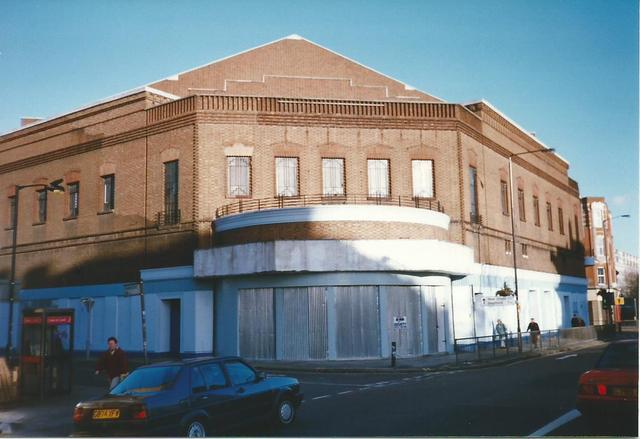 Located in the south-east London district of Peckham. The 1898 built, Peckham Hippodrome Theatre was demolished in 1929 (it has its own page on Cinema Treasures). The Gaumont Palace Theatre was built on the site. Built by Provincial Cinematograph Theatres(PCT), it was the first Gaumont Palace Theatre to be built in London. It opened on 8th February 1932 with Edna Best in "The Calendar" and Nelson Keys in "Almost a Divorce". Bobby Howell and his Band appeared on stage, as well as variety acts Joe Boganny and his College Boys and Bernardi, the Golden Voiced Tenor. Organist Arthur Raymond opened the Compton 3Manual/10Rank organ, with the console on a lift.

The Gaumont Palace was built at a diagonal angle to the site, with the entrance on the corner of Peckham High Street and Marmont Road. It had a very wide auditorium at the rear, and seating was provided for 1,550 in the stalls and 950 in the circle. The proscenium opening was 38 feet wide and there was an 18 feet deep stage. Dressing rooms were located under the stage.

In 1937, the name ‘Palace’ was dropped and it became the Gaumont. It suffered some bomb damage in 1941, which closed the cinema for a short time. In July 1944, a V1 Rocket badly damaged the left hand side of the facade, closing the cinema again, until it was repaired and reopened on 22nd January 1945. The cinema was closed for almost four months for re-furbishment in late summer of 1948. The Gaumont closed on 14th January 1961 with Norman Wisdom in “The Bulldog Breed” and “The Final Dream”.

The Gaumont Peckham was the first Rank Organisation cinema to be converted into a Top Rank Bingo Club, opening on 15th May 1961. Initially it was just for four nights only, with wrestling matches held one other night. Soon it became a full time Top Rank Bingo Club and the auditorium was modernised in the 1970’s, removing all traces of the Art Deco style decorative scheme. Bingo continued through to 1998, when it was closed as a Mecca Bingo Club. The Gaumont was demolished in the summer of 2002, and a block of flats ‘Gaumont House’ was built on the site.

The Gaumont, photographed as the Top Rank Bingo Club in July 1983:
View link

When I worked for Top Rank Clubs as a assistant manager I was posted to Peckham having spent the summer at their club in Paignton….Gaumont Peckham was a great building….massive foyer where patrons bought bing tickest in the first foyer and then descended steps down to the larger foyer where there was a confectionery stand and a food part…we sold an enormous amount of jellied eels etc….Ther was a bar under the stage and another where the projection box would have been giving a great view of the club below….our office was at the very top of the building and I remember there being long corridors which must have encircled the interior of the building.