Megaplex 13 at The Junction 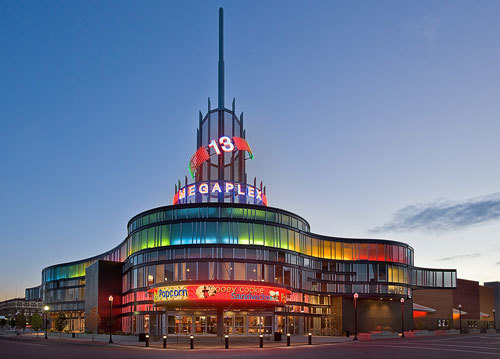 According to the Salt Lake Deseret News, the Ogden Mall had seen better days in the 1980s and 1990s. By 1999, Nordstrom had left and J.C. Penney was packing. Major developers had said no to the city and that the mall had to be torn down. The city then bought the land for $6 million and had the mall torn down by 2002.

The center of the rebirth is a giant recreation center that includes restaurants, bowling, rock climbing, boarding, surfing and the works.

In the summer of 2007, Utah Jazz owner Larry Miller’s Megaplex 13 at The Junction opened. This was Miller’s fifth Utah Megaplex. The Ogden Standard-Examiner said the cost was $11 to $15 million. With total seating listed as 2,460, the auditorium sizes range from 120 to 590 seats. Other services include auditorium rentals, private screenings, catering and rooms for group meetings and parties.

Also, from their website:
“Megaplex Theatres offers Descriptive Video Service and Rear Window Captioning for blind, visually-impaired, deaf and hard-of-hearing movie patrons to enhance their movie-going experience. It is the only theater company in the area to offer both of these advanced services to their guests”.

Like three of the other four current locations of the Megaplex Theatres chain, the Megaplex 13 at The Junction was designed by FFKR Architects of Salt Lake City.

The page at FFKR Architects' web site is gone, but there is a photo here, at the web site of Yesco, the company that built the signage for the project.

There are a few photos, including some construction photos, on this page at the web site of Reward Wall Systems, the company that provided the ICF blocks that were used in the construction of the theater.

The link to the photo at Yesco has quit working for some reason. Here’s a new link.