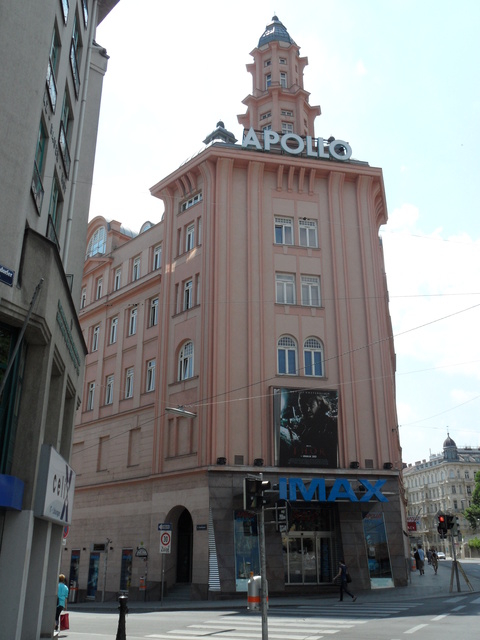 Located in the Mariahilf district (District 6) of Vienna. The Apollo Kino opened on 11th November 1929 and was operated by the Kiba chain. With a seating capacity of 1,500, it was the second largest cinema in Austria (after the 1,800 seat Busch Kino in District 2 of Vienna). The Apollo Kino was equipped with a Christie 2Manual/7Rank organ which was opened by organist William G. Barnes. The Apollo Kino became the ‘Premiere’ cinema of Vienna for many years. During World War II, like all other cinemas, it was confiscated by the Nazi’s and was operated by the Nationalsozialistische Ostmarkische Filmtheater company. After the War ended it was returned to its original owners.

In 1962, it was converted into a 3-screen cinema with seating capacities of 681, 86 and 86. In 1992 the cinema was closed for conversion into a multiplex cinema which opened in 1993. Further alteration occurred in 1996 and there are now 12-screens, the largest screen seats 504. Since 1997, the Apollo Kino has been operated by the Constantin Group, who operate other multiplex cinemas in Austria and Germany.