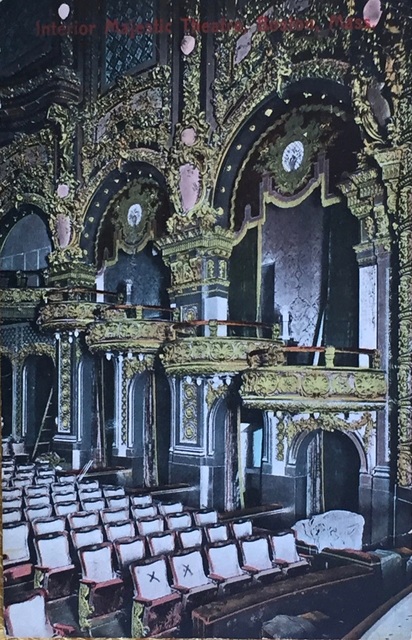 Architect John Galen Howard designed the building, and architect James M. Wood designed the interior of the 1,897-seat theatre. Originally opened on February 16, 1903 for opera, the Majestic Theatre was converted to vaudeville shows in the 1920’s and was showing movies as part of the program by 1923. Then, in the 1950’s, the Majestic Theatre was changed again, this time to a movies-only schedule. But unfortunately the change to film came with renovations that transformed the lobby and covered up much of John Galen Howard’s Beaux-Arts work.

The theatre continued to show movies until 1983 as the Saxon Theatre under the Sack chain. By then, the theatre, like many others in the area, had begun to deteriorate both in appearance and in programming.

Emerson College purchased the theatre and brought it back to its original Beaux-Arts splendor. In 1989, the first phase of renovations were completed, and in fall of 2003, the second phase of renovations completed. The theatre today is a performing arts center for both Emerson and the community at large. The theatre has again been renamed, the Cutler Majestic Theatre, after donors Ted and Joan Benard-Cutler.

More details about the Fox Theatre across from the Majestic. Its west wall was on Tremont Street, north wall on Boylston St., south wall on LaGrange St. Its east wall, the rear wall of its stage, would have been up against the rear stage wall of the Publix/Gayety Theatre on Washington St. Its main entrance would have been on Boylston near the corner of Tremont; the circular rotunda-style inner foyer would have had doors on Tremont Street, and also behind the grand staircase leading out to LaGrange Street. The Fox would have been the largest movie palace in Boston, with at least 600 more seats than the Met/Wang. Its west wall would have been located diagonally across from the front of the Cutler Majestic.

I remember that the upper balcony was closed but the lower one wasn’t and, there were rat in the there! One time I was on a date and we put our popcorn barrell down at our feet and within minutes there was a rat digging in to our barrell of popcorn!

The Majestic was definitely showing films in 1925. I’ve got a herald for THE BIG PARADE (1925) from this theater saying screenings were twice daily (2:30 and 8:30) and all seats were reserved.

The Majestic was showing movies as early as 1923.

There’s a new retrospective article out on “Camelot” which gives an overview of its roadshow run (including mention of its engagement here) and a historian interview.

I noticed a comment mentioning sitting in the Saxon and seeing light coming in from behind the screen. There was a skylight backstage that leaked rather badly. So during rainstorms there was water dripping among the huge electrical switches back there. Never had to do it but was told only way to replace lights that were at the top of the interior dome was to send someone up above and into the ceiling interior. The light unit would then have to be lowered to the floor on a rope and the bulb changed.

The book “Movie Roadshow” by Kim R. Holston mentions The Saxon hosted the world premier of ‘The Cardinal’ in 1963. Also mentions that Ben Sack thought New York critics unfairly savaged many films in their reviews so he was determined to make Boston an alternate hub for big premieres. He resurrected the Majestic theater, installed TODD-AO equipment, renamed it The Saxon and opened it with Oklahoma and later Around The World In 80 Days.

As a side note, the alley next to the building was renamed “Allen’s Alley” to honor the late great comedian Fred Allen. I believe this happened in the mid 1960s.