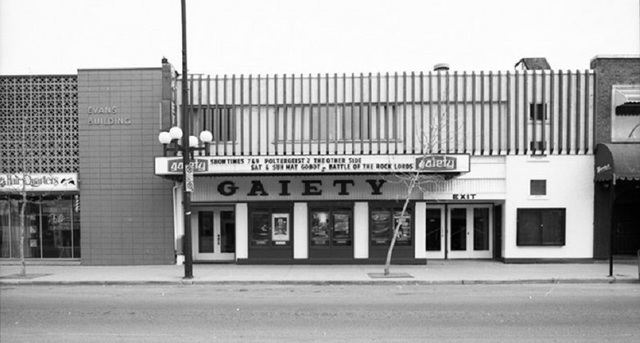 The Gaiety Theatre opened in 1950 on 100 Avenue, close to the intersection with 100 Street. It became a church and was demolished in 2012.

This is a marquee photo. I’m not sure if the 1986 photo is this theater.
http://tinyurl.com/y8a9loe

The recent opening of the Gaiety Theatre was noted in Boxoffice magazine of April 29, 1950. The original operators were the Jeanotte brothers (Leo and Albert), of Gravelbourg, Saskatchewan.

Grande Prairie, then a very small town (with a population of only 2,500 according to one Boxoffice item from 1949— it has over 50,000 now), was already home to the Capitol Theatre, which I’ve found mentioned in Boxoffice as early as 1938. A 1956 item said that the Capitol had installed a wide screen and that it had 490 seats.

In 1962, Ralph Norton, then owner of the Gaiety, purchased the Capitol Theatre, as reported in Boxoffice of February 19 that year.

The Gaiety was demolished in 2012.