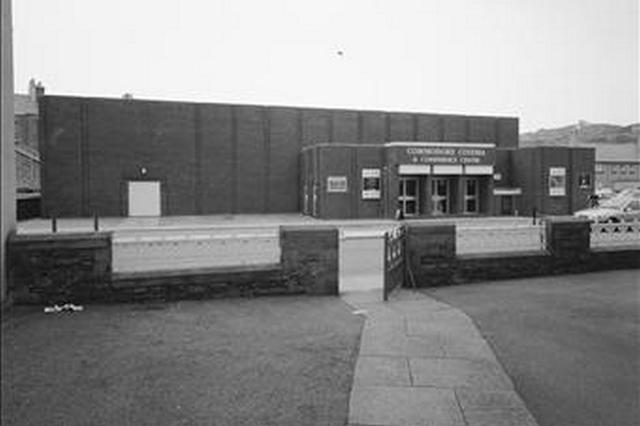 The Commodore Cinema was built on the site of the old baths building in Bath Road. In 1922, this became the Imperial Cinema, the Forum Cinema in the mid-1930’s, and later the Celtic Cinema until demolition in September 1976.

The Commodore Cinema opened on 17th May 196 with Sean Connery in “The Man Who Would Be King”. It was a modern cinema, rather plain on its brick exterior. It had the facility of a Licenced bar for its patrons. From 1995, it has also been used as a Conference Centre.

A photo taken around 1978ish – must have been very soon after opening – here:

The Commodore opened on 17th May 1976 with “The Man Who Would be King”, starring Sean Connery and Michael Caine. Having acquired the adjacent Conway Cinema (see separate Cinema Treasures entry), David Davies, owner of the Commodore, had plans drawn up to demolish it and replace it with a second screen for the Commodore, which would seat 350. Unfortunately, he was never able to proceed with this further development.