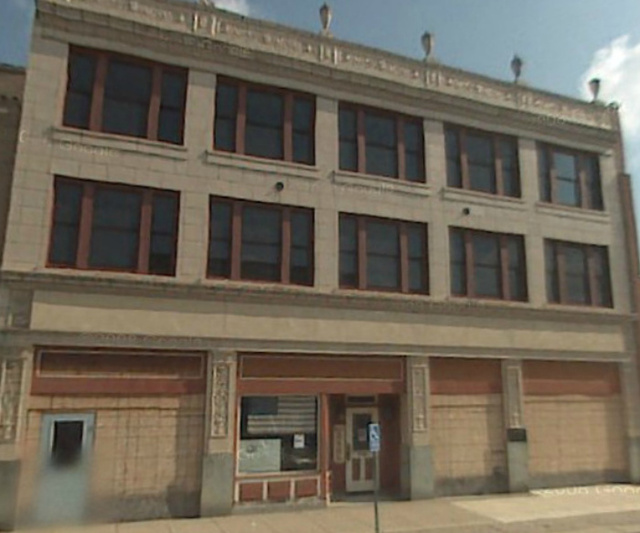 Built on the site of the Pastime Theater which opened as a movie theatre on February 22, 1908. Following alterations it was reopened December 16, 1911. It was burnt down around 1925 and a new Pastime Theater was built.

The Pastime Theater was operated by Warner Bros. Circuit Management Corp. by 1941. Armstrong Theaters operated it in the 1960’s and 1970’s. After they opened the Plaza Cinema, Armstrong operated the Pastime Theater as a dollar house in 1974 and 1975. It never had air conditioning; big fans in pipe chambers cooled it in summer. Managed for many years by Jim Hale.

A balcony has been added, so seating capacity will increase if the theater reopens. The stage area has been enlarged. The Pastime Theater had an organ, but do not know status.

The building was purchased on 10/29/10 by Moon Property Management for $109,400 in back taxes. According to a Coshocton Tribune article of the same date, Mr. Moon plans to complete the project with help from the community.

The NRHP nomination form for the Moreland Theatre in Cleveland lists the Pastime Theatre in Coshocton as one of five theaters designed by the Moreland’s architects, Sigmund Braverman and Kurt Havermaet.

Does anyone know when the architects Braverman and Havermaet were involved? They weren’t the original architects as they didn’t work together until at least 1921 and Braverman was born in 1894 so he would have only been 18. Assuming it was some sort of remodel. Appreciate any information!

Actually Braverman would have been only 13 or 14 when the Pastime opened. An advertisement in the February 17, 1929, issue of The Coshocton Tribune, placed by Chacos Bros. Amusement Company, operators of the Pastime, said that the company was celebrating the 21st anniversary of the opening of the house. The events were scheduled for the 21st, 22nd, and 23rd, so it was probably one of those dates in 1908 that the Pastime opened.

It’s possible that Braverman and Havermaet’s work on the theatre came as early as 1922. Though it doesn’t name any architects, an item datelined Coshocton in the February 2, 1922, issue of The Moving Picture World said that “Chacos Amusement Company will make alterations and construct an addition to Pastime Theatre.”

Also interesting with regards to the architects, notices of the formation of the firm Braverman & Havermaet published in 1922 give their names as S. Braverman and K. Van Havermaet. The Van does not appear to have ever been used in the firm name, though.

However, a Google search on the name K. Van Havermaet turns up a number of pages in Dutch which make reference to an architect of that name having designed at least one project in the region (a “Huis in art-decostijl….”) in the mid-1930s. As near as I can tell he was based in the Belgian town of Sint-Niklaas. So far I’ve been unable to get Google to open any of these pages, let alone translate them, so all this information comes from the snippets in the search results. I wonder if this was the same K. Van Havermaet? He might have returned to Europe due to the difficulty of getting work in the U.S. in the early ears of the depression.

Joe Vogel and cath61 – I have photo copies of a few pages of the architects drawings. Will comment later. The original theater was purchase in the 1920’s by Chacos Brothers. I understand it burned down and a new Office building was built and the new Pastime circa 1925. Yes, it had a Wurlitzer! I believe it was damaged in a flood in the 1970’s. The family still has 3 of the stained glass Wurlitzer doors. More to share later, including a photo in its prime.

This opened on December 16th, 1911 according to this newspaper article

Wow Thanks rivest226 !
Great info. I didn’t realize the brothers had the Pastime that early.
I have a copy of the architect drawings for the current building that I will dig out. I THINK this 1911 Theater in the article isn’t the present building.

Other Tribune articles indicate that the 1924-25 project was an expansion of the existing Pastime Theatre, with the addition of the three-story office and store building in front. this article notes that the Pastime’s original lobby was to be partly torn down, so it seems likely the rebuilding was not actually occasioned by a fire.

It is possible, though, that the original Pastime was completely rebuilt earlier in its history, or perhaps moved from another location. A February 20, 1938 Tribune article said that the Pastime would be celebrating its 26th anniversary on February 22, which would correspond to a 1912 opening. However, a February 17, 1929, ad for the Pastime said that the house would be celebrating its 21st anniversary on the 22nd. That would give the theater an opening date of February 22, 1908.

I see that the 1911 clipping Rivest links to notes that Chris Chacos had recently taken over management of the house (perhaps from one of his brothers?) and had “…made a number of improvements on the interior….” which indicates that the theater had indeed been in operation prior to the 1911 event. The item also notes that a subsequent closure for further improvements was planned. It’s possible that the 26th anniversary in 1938 indicated that the building was completely rebuilt in 1912, though that would leave the question of why this had not been noted in the 1929 21st anniversary ad.

Thanks Joe Vogel. My mother and her 1st cousin – both Chacos, were born in the later 1920’s, so they remember the Pastime to be mostly as it looks today (of course the Marquee is gone now). There were three Brothers – Chris, Pete and Ted. Greeks who left a Village called Nestani (aka Chipiana) and went to Utah before going across the country with black sheets, white sheets, a projector and record player. They went around to cities renting vacant store fronts and put the black sheet against the window to block the light and the white sheet up on the back to project silent movies. I still have a couple silent movie records.
The story goes that Coshocton was the Boom Town – with the canals crossing there, and they settled there to build a real Theater. And another and another… Plus a bowling alley. I read an article I found in the Tribune about 10 years ago that mentioned that the brothers bought the Pastime as an existing Theater and that soon after it burned down and they rebuilt the larger, nicer building. Of course, the surviving Chacos were all born after when that would have happened and don’t remember ever hearing that.
They built and started other Theaters / Vaudeville Houses in town prior to The Pastime. I have photos and information… One was the Utahna.

I promise to put those photos here soon. My memories were of spending time with my grandparents Ted Chacos and Joanna starting in the early 1960’s, and “going to work” with Ted. I remember being in the Theater and seeing the original working mechanisms of The Wurlitzer and the gas fed projector in the booth above (I remember it being very hot). There were stained glass doors on the Wurlitzer, but they had long been removed in the 1960’s, as one pair was made into a china cabinet that was in Ted’s home and is now on display at his son Chris Chacos' Restaurant The Village Smithy, outside of Aspen in Carbondale Colorado. The other remaining stained glass Wurlitzer panel is in my possession in Cincinnati. We sold the Theater and building in the 1970’s… Ted was the last surviving brother and past away in 1974.
It is true that it was a Warner Brothers Theater… They signed a “50 year deal” with Warner Brothers before the depression that apparently was lucrative… And WB tried repeatedly to get out of. Last time I was in the Theater was in the later 1970’s.
The power was off and the theater was long closed, but the store fronts in the building were open and one. had a secret door into the Theater and the shop keeper let us all in through there. We used a flashlight and a flash camera to capture the damage caused by pipes above that broke during a winter freeze, flooding the theater completely.
The floor boards were all warped and the seats were raised and twisted. I remember going down towards the stage and pulling on wood to expose the Wurlitzer mechanics – but the wood was so rotten by the flood waters, that it just came off in my hands. The Pastime was forever gone.