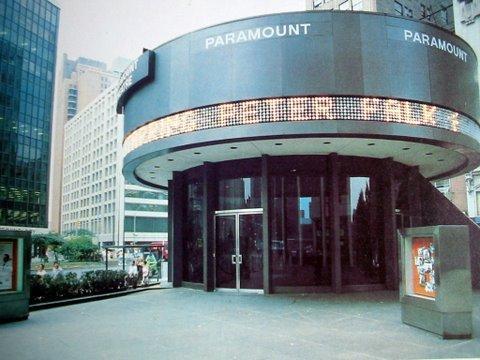 Nestled under the base of the former Gulf & Western Building which was the home of Paramount Pictures at the corner of Manhattan’s Columbus Circle, it featured mostly high profile films and Academy Award nominated features. The Paramount Theatre was opened on June 24, 1970 with “Catch 22”. It was taken over by Loew’s in 1981.

Before it closed on March 30, 1995, it screened the film “Forrest Gump” which had stayed there for months.

The building above was sold to real estate mogul Donald Trump who converted it to a hotel and tower today. The theatre was the first to go – it was completely removed and is now an underground parking garage in the basement of the hotel. Today, there’s no sign that the theatre ever existed.

Actually, the auditorium was more interesting than described above. My predecessor at Radio City, Bill Nafash, did the installation in both the theatre and the two Paramount screening rooms in the offices at the top of the building. All of the projectors were 70mm, and before they were installed Radio City took three of them to get “Airport” opened on time. Three of the machines were in the theatre, and Bill said it was really really unique, at least in concept. The auditorium was designed to look like the bellows of a camera narrowing as it got closer to the screen. The “curtain” at the front was designed to look like a camera lens when the curtain was closed. Bill said originally strobe lights were installed in the coves in the “bellows” designed to look like camera flash bulbs going off. Alas the effect was too successful triggering discomforting effects in the audience. The flashes were soon eliminated. The travelling attraction sign above the entrance was also one of the first in New York to not feature fixed sign letters. That too was an idea who’s time may not have come since they were limited to incandescent bulbs with all their limitations. In all the theatre was probably a result of form over function, and while the design concepts may have worked better on paper than in reality, at least the idea was more interesting than indicated above.

Oddly, my usual steel-trap memory recalls nothing innovative about the auditorium at all. Of course, I was only there once, and it was a long time ago; yet I remember everything else about that evening as if it were yesterday.

As a teenager in the 80’s, I considered this weird venue a fun place to catch a flick. I have a vague memory of a spiral escalator transporting you downstairs? I didn’t visit often, but I remember going for Making Mr. Right.

I saw The Breakfast club there, it was one of my favorites….

20 years ago today Forrest Gump came out at this theater and others.

I went to see Tootsie on opening day & saw Dustin Hoffman when I was leaving. I do remember the winding staircase. It was nice.

They ran “Star Trek – The Motion Picture” in this theater back in 1979. On a advance-ticket, reserved seat engagement, despite the film opening in 400 other theaters nationwide (including 40-50 in the N.Y. metro area) on the same day – December 7, 1979. After eight weeks, when most theaters dropped the film, the Paramount still ran it. On a general admission basis, though.

Was this film shown in 70mm dolby stereo or just 35mm?