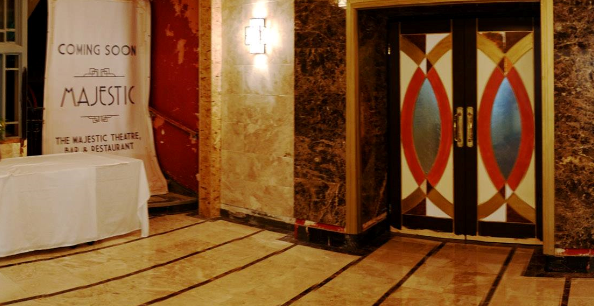 The Majestic Cinema opened on 26th December 1932 with Nancy Brown in "Maid of the Mountains". It was built for an independent operator.

Seating in the auditorium was provided for 1,580, with 1,039 in the stalls and 541 in the balcony. The proscenium was 45 feet wide, the stage 17 feet deep and there were five dressing rooms. The cinema was equipped with a Compton 3Manual/8Rank organ which was opened by Frank Matthews. An additional facility was the provision of a cafe.

In November 1935, it was taken over by National Provincial Cinemas Ltd. who were part of Union Cinemas chain. In 1937, Union Cinemas pulled out of the running of the Majestic Cinema and it returned to its original operators.

It was taken over by the Oscar Deutsch chain of Odeon Theatres Ltd. on 16th July 1943 and re-named Odeon on 9th April 1945. The cafe was still advertised as open during the 1950’s. In 1968, the Compton organ was sold and removed from the building. It was around this time that the facade was covered over with metal strips, in order to ‘modernise’ the building.

There was talk of the Odeon being converted into a twin-screen cinema, but these came to nothing. It was loosing money, and the Rank Organisation closed the Odeon on 24th October 1981 with Burt Reynolds in "Cannonball Run" being the final film screened.

The building lay empty and unused for several years, and in October 1986 it was converted into use as a snooker club, which operated in 2008 as Riley’s Snooker Club.

In 2014, renovation work was begun to convert the building into a banquet suite and live performance venue. The pool hall continued to operate in the former foyer of the building for a while. In 2014, the metal cladding on the façade was removed and the original tiled façade was restored, including the re-instatement of the Majestic name sign. Plans for the lower part of the building now included a children’s play area, which opened September 2014. In June 2015 a 280-seat live theatre space is operating in the rear of the former circle. The circle foyer is used for screening films by the local film society.

How could they have coveerd up such a gorgeous frontage?

Another shot of the Majestic / Odeon which is looking in a sad state now:–

An exterior shot from 2011. The upper level is reportedly intact but in a very poor state – a request for access was refused because “the floor is not safe” – the former ground floor stalls area is still in use as Rileys Snooker Hall. There appears to be much use of stained glass in the windows.

Union Cinemas, who briefly operated the Majestic prior to its purchase by Oscar Deutsch, were taken over by Odeon’s rival company, ABC. Union had plans to open a brand new Ritz Cinema in Darlington but this failed to materialise. A possible reason for this could have been that ABC (who already had the Regal Northgate) were able to cancel the project upon their acquisition of Union. Had it come to fruition and had, in turn, the Majestic been a Union Cinemas outlet upon takeover by ABC then that company would have had the three largest and most modern cinemas in Darlington and it is therefore debatable as to which of those three would have been retained.

The Odeon, Bondgate, Darlington,was going to become a drop wall triple cinema – IE the original circle looking onto the original proscenium as screen 1 and two mini cinemas in the underhang of the circle (IE in the rear stalls).

A problem arose whereby there would be insufficient clearance (owing to the positioning of the main supporting girder)for the projection from port to screen in the two ‘minis’. The conversion was therefore cancelled.

The ABC(Regal)Northgate had been conspicuous by its absence from a list of proposed conversions of ABC Theatres published in 1976 from which one could deduce that the writing was on the wall for that venue. However, as soon as it became known about the problem with the Odeon (Majestic), the ABC was not only added to that list but was rushed ahead in the queue and was converted in very much the same manner which had been intended for the Odeon (Majestic).

So, had the best laid plans of mice and men gone ahead the Odeon (Majestic) would have seen the ABC off instead of vice versa and, I dare say, would eventually have been further sub divided like most surviving Odeons.

Anyway, it seems very likely that the Vue Complex is finally going to go ahead in Darlington and that surely will spell the end for the Regal/ABC/Cannon/ABC/Odeon, Northgate.

Double confusion in Darlington as some dozen or so years after the Majestic became the Odeon a neighbouring CMA (Rank – Gaumont Division) Cinema, the Arcade on Skinnergate, was converted into the Majestic Ballroom and it survives today as the Gala Bingo Club. To further compound matters some two decades after the Odeon (ex Majestic) closed as a cinema, the ABC (former Regal) on Northgate became the Odeon! In the heyday of Darlington Cinemas (there were nine) the latter had the largest capacity – by 40 seats…..the ABC Regal seating 1620 and the Odeon (Majestic) with 1580.

Magic and Mayhem, the North of Englands largest soft play centre opened on the 20 September 2014. The centre currently occupies the former stalls.

The circle will be subdivided to form a 300 seat cinema auditorium and a stage will be constructed for shows, live acts, music. A Café/Bar will be provided in the former café.

The 280 seat theatre is to open next month. The seating area is within the former rear circle with a new stage occupying the front circle and the area forward of the old balustrade :–

What a pity that the entire circle and stalls could not have been retained but at least the building has has been saved. I rate its chances for long term survival to be much better than in the case of the Regal/ABC/Odeon after the Vue multiplex opens.

On Thursday 9th May 2019, passing Darlington with Gene Sorkin, I paused at the Majestic primarily to take a look at the refurbished exterior. However, venturing inside, we got talking to a young lady, Colette, in the box office (which at that time was servicing the children’s play area in the former stalls) and, recognising our interest, she offered to show us the upstairs theatre. She is clearly very proud of this, which is building up a regular programme of live events. With the council concentrating on the Hippodrome, the Majestic has to be self-supporting but, in addition to the theatre, there is also a large bar area available for hire – and a cinema screen has been erected in an adjacent upstairs foyer area, where a local film society hosts regular film shows. Although, inevitably, still a work in progress, much has already been achieved and the upstairs spaces are in very good shape, all of which bodes well for the future.