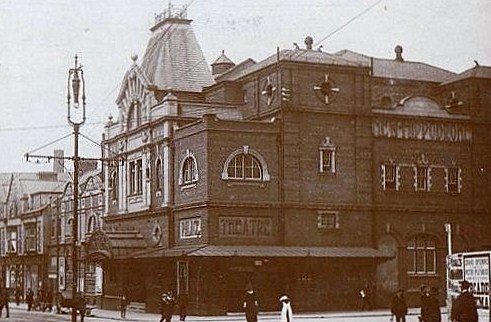 The Hippodrome and Palace Theatre opened in 1907 and was owned and operated by Signor Rino Pepi, who operated several other local variety theatres. Designed by architect G. Gordon Hoskins, under the supervision of architect George F. Ward, of architectural firm Owen & Ward. The original seating capacity was 1,082; 104 in the fautiles (front stalls), 243 in the orchestra stalls, 187 in the pit stalls, 274 in the dress circle and 378 in the gallery. There is a box located at dress circle level on each side of the proscenium.

There is delicate plaster decoration throughout the theatre, and above the two boxes there is a pedimented feature. The square proscenium is 28 feet wide, the stage 37 feet deep and there were eight dressing rooms (now rebuilt).

The Hippodrome and Palace Theatre was equipped to screen films from its opening, initally with a bioscope projector, which screened short subjects as one of the acts in the variety bill. Talkies were installed here and for a while it screened films , but soon returned to variety programmes. By 1937 it was operated by the E.J. Hinge cinema circuit of Newcastle upon Tyne. The seating capacity was given as 1,168 at that time. In 1949 it was taken over by the independent Stanley Rogers Cinemas circuit and became the New Hippodrome Theatre, and programming continued to vary between weeks of films and weeks of variety programmes. The New Hippodrome Theatre was closed in June 1956.

It lay closed and unused until 1958, when it was taken over by the local Council and re-opened as a live theatre, re-named Civic Theatre. It is due to close at the end of May 2016 for restoration and renovation works to be carried out. It is planned to re-open 18 months later as the re-named Darlington Hippodrome.

I worked on a tour of ‘A Chorus Line’ back in the mid 80s that played a week here and back then the stage facilities were very limiting to say the least. The large orchestra for the show was housed upstairs, in the funtion room, of a pub up the road from the theatre and relayed back to the auditorium.
Beautiful, atmospheric theatre, well preserved.

This theatre closes at the end of May 2016 for a period of eighteen months for a £12 million refurbishment. When it reopens it will be with a ‘new’ name:–

Certainly, to revert to the original name is not before time as I always maintained that ‘Civic Theatre’ conjures up an image of a 1960’s concrete edifice as opposed to a very atmospheric Edwardian theatre.

I once mentioned this to members of the Town Council whilst I was a Manager in the town (at the ABC) and they said that the name ‘Hippodrome’ was rather ludicrous sounding. I remember ‘sticking my neck out’ and retorting that the name was certainly good enough for the major cities of Birmingham and Bristol – which did not go down awfully well…………

When the Hippodrome does reopen I have little doubt that it will then be the town’s only remaining theatre building as CJ Phipps' Theatre Royal which survives , albeit largely rebuilt but with much of the superstructure remaining, as the Odeon (former ABC Regal) will, in all likelihood, have fallen victim to the new Vue complex.

Article re the expensive stage drapes at the Hippodrome:–