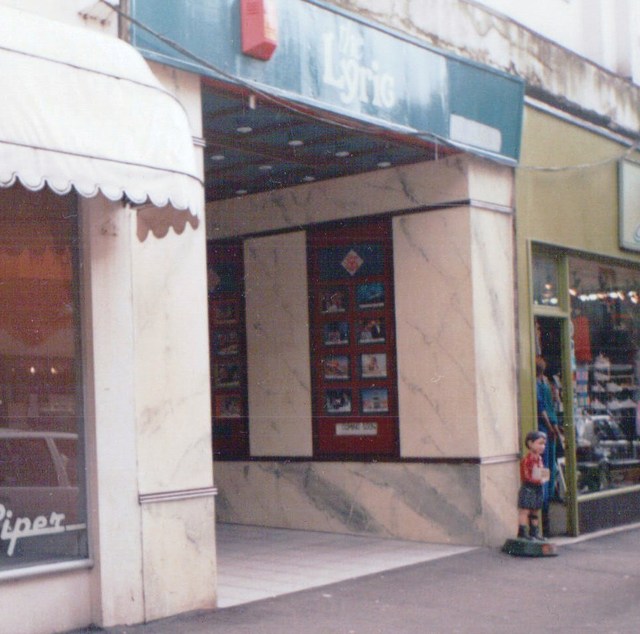 The Assembly Rooms opened on 21st November 1854 with a seating capacity of 600. It was used for plays lectures, balls and other entertainments.

From 1st April 1918, it was re-named Lyric Cinema, with programmes of films, and concert party type shows performed on the stage. The Lyric Cinema was wired for sound in March 1930 and Al Jolson in “Sonny Boy" was screened. At the end of March 1931, it was closed for two weeks for some modernisation to take place. A cafe was added and a new 20 feet wide proscenium was installed. The Lyric Cinema now had 550 seats.

In 1934, it was decided to build a new auditorium on land behind the Assembly Rooms/Lyric Cinema. Designed by architect William W. Wort of Cardiff in an Art Deco style, the New Lyric Cinema opened on 6th August 1936 with Richard Tauber in "Hearts Desire". Seating was now provided for 900 in stalls and circle levels. There was a 36 feet wide proscenium with a fully equipped stage.

The Lyric Cinema closed in late-August 1983 and then lay empty and unused. It was taken over by the local Council and was refurbished and re-opened in 1986. Today it operates as a live theatre, with some first run cinema use.

In January 2021 a convoy of film production vehicles arrived in Carmarthen and filming started on the feature “Save the Cinema”, the story of the real-life campaign waged by Liz Evans, a hairdresser who also ran a youth opera group at the Lyric, to save the cinema/theatre from closure and demolition in the early 1990s. Samantha Morton portrays the intrepid campaigner, while Jonathan Pryce appears as a fellow film fan who used to work at the cinema, and who helps get the projectors working again for a one-off screening of John Ford’s 1941 classic “How Green Was My Valley”, the success of which demonstrates the townsfolk’s support for the Lyric.

The film also depicts Liz’s efforts to obtain Steven Spielberg’s “Jurassic Park”, when distributor United International Pictures reneged on a promise to provide it. She and the mayor of Carmarthen, Richard Goodridge (played by Harry Potter star Tom Felton) made direct contact with Spielberg’s company in America, which cut through the red tape and enabled the Lyric to show the film on 15th July 1993, the same evening as the star-studded UK premiere in London. (The Lyric screening was supposed to start five minutes after the London premiere, but legend has it that the clocks were altered, and it started at the Lyric one minute before!)

The film is corny but very likeable: its heart is definitely in the right place, though projectionists will smile at the ease with which long-unused projectors are miraculously brought back to life, and the equal ease with which transit cans containing two or three reels of 35mm film are carried as if they contain feather dusters!

“Save the Cinema” was produced by Sky Cinema, and premiered on Sky Premiere (satellite TV) from Friday 14th January 2022. It was also given a limited theatrical release in the UK from that date (including, of course, the Lyric, where it played from 14th to 30th January to ‘sold out’ performances). I saw it at the appropriately-named Premiere in Romford (the former Odeon multiplex - see separate Cinema Treasures entry) on Thursday 20th January.