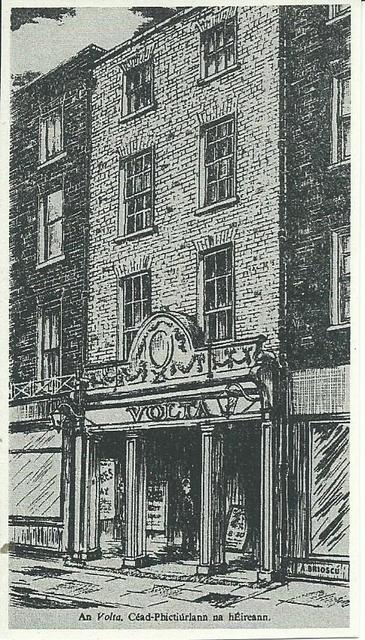 Opened on 20th December 1909 as the Volta Picture Theatre, it was set up by novelist James Joyce in an old ironmongery shop. Seating was provided for 420, all on one level. Initially all films screened were from Italy, with Italian title-pages that explained the plot. Leaflets were printed in English so the audience could interpet the film story. The Volta Picture Theatre was not a success and after seven months of operation, it was sold to British National Pictures. By 1914 it was operated by the Provincial Cinematograph Theatres(PCT) of London, England.

The name was changed to the Lyceum Picture Theatre around 1921. This theatre closed in 1947, it reverted back to retail use, as a drapery shop. Later demolished a Penney’s fashion store has been on the site since 1969.

A plaque to commemorate the previous history of the Volta Cinema, including the relatively fleeting James Joyce connection, was erected on the new building some years ago.

Joyce only participated in the initial setting up of the Volta, having induced some cinema operators from Trieste, where he then lived, to open a dedicated cinema in Dublin. They put up the money, Joyce and his father found the premises (and also looked at premises in Cork, presumably for another cinema, though nothing came of this) and set up the cinema, returning to Trieste almost immediately with an agency to sell Irish Tweed there. That proved equally unsuccesful.