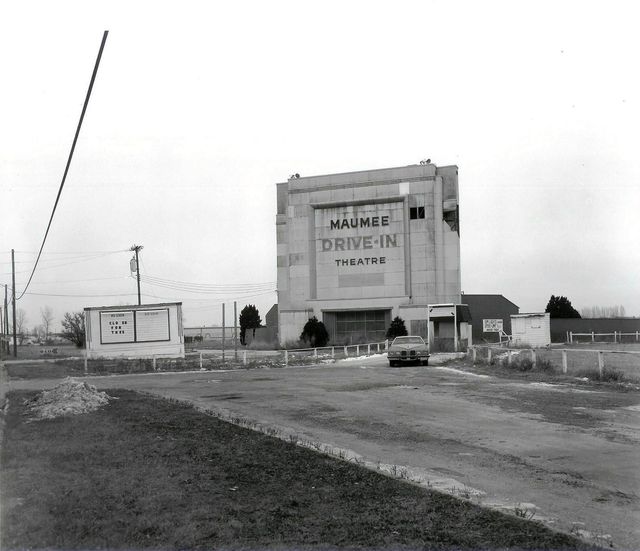 The Lake Erie Drive-In opened on May 9, 1941 featuring Madeleine Carroll and Fred MacMurray in “Virginia”. It was owned and operated by the Lake Erie Drive-In Theatre Inc. Irving Gandell was the president, with Herbert J. Ochs and Harry E. Long as the operating managers. Jim Dempsey is the local theatre manager. Charles Einsel, a member of the I.A.T.S.E. affiliated with the American Federation of Labor, was the projectionist. Lake Erie Drive-In Theatre Inc. took out a ten year lease on the twenty-two acres of farmland owned by the Ragan family, in which only eight acres were being used. Construction on the new drive-in was estimated to cost between $60,000 and $64,000. The parking ramp had a 600 car capacity.

It featured a 40ft. x 50ft. screen tower that was raised to a height of 75 feet. It was equipped with two Peerless projectors with a sound system consisting of four outside blast speakers that were located under the screen. It was only known as the Lake Erie Drive-In for a short period of time. It was advertised as the Drive-In Theatre for the next four and a half years. During World War II, all members of the armed forces received free admission. On June 31, 1945, (Arthur & Paul) Winter Brothers Theatres bought the Drive-In Theatre. Jim Dempsey who was the theatre manager since it opened, left at the end of November 1945. Dempsey would go on to open the Telegraph Drive-In the following spring on April 26, 1946. Later on Dempsey would also open the Parkside Drive-In in Oregon, OH. in 1949.

The Drive-In Theatre reopened on April 20, 1946, as the Maumee Drive-In, featuring the 1944 movies “Tall in the Saddle” with John Wayne, Ella Raines and Ward Bond. The second feature was the short subject “No Dough Boys” with the Three Stooges. Before reopening for the 1948 movie season, brand new RCA in-a-car speakers were installed to replace the outside blast speakers. Thomas F. Whyte, who was the theatre manager supervised the installation. In addition, the parking ramp was enlarged to accommodate 800 cars. In March 1949, a complete remodelling of the drive-in was started. Improvements included a new 40 ft. x 40 ft. concession stand and the installation of a new all steel enclosed screen tower.

High winds during the winter months destroyed the old screen tower. The new screen tower was decorated with fluorescent and neon lighting effects. Barnie Fasnaugh, who worked at the drive-in as an usher during the summers of 1948 & 1949 recalls: “Friday and Saturday nights were the busiest. On some Saturdays the lot would be full and a ‘Sold Out’ sign was put at the entrance. Just before the show started the ushers would walk up and down the rows, reminding drivers to turn off their headlights. They had in-a-car speakers which hung on the front windows. Sometimes a driver would forget to take the speaker out, drove off with it and pulled the wire out of the speaker post. If the speaker was hung on the rear window, the glass would usually break”. Barnie also recalled: “There was always a big rush to leave at the end of the show. The ushers would get a lot of grief when they had to alternate and block rows to regulate traffic to the exit drives. Some drivers would threaten to run you over if you did not get out of the way, and drive tight against you. A few times the ushers would get mad and throw their flashlight at the windshields of the cars. It never happened on a night I was working, but a couple of times windshields were cracked or broken and ushers got fired”.

Co-Operative Theatres of Ohio, Inc. from Cleveland, OH. was the booking and buying agency for the Maumee Drive-In from mid-1940 into the 1970’s. In April of 1954, before the opening of the summer season, Oliver Theatre Supply Co. installed two RCA 100-projectors with heavy duty based and Strong Super 135 carbon arc lamps, rectifiers and wide-screen lenses. The screen tower was also modified by adding wings on each side to widen it for screening CinemaScope pictures.

Theater Corporation of America purchased the Maumee Drive-In on June 24, 1960. Theater Corporation of America, Theater Operating Co. Theater Equipment Co. and Eprad was owned by Albert Boudouris. Boudouris also owned at this time the Franklin Park Drive-In and the Miracle Mile Drive-In. During Boudouris ownership, all three drive-in’s were advertised as auto theatres instead of drive-in theatres. Boudouris operated all three of them until July of 1963, when all three drive-ins were sold to Redstone/National Amusements. They advertised them as drive-in theatres again. In 1978, Redstone applied for a permit for a second screen and the Maumee Drive-In was twinned.

This is in the Toledo, Ohio Merto area?

A now vacant Showcase Cinemas is on the site, see a photo here.

Updated with new overview and pictures.

I grew up at this drive-in. In the late sixties and early seventies, it was kept fairly nice, but the owners let it slide by the eighties (really run-down by its closure in ‘86) Housing developments didn’t help (owners were constantly complaining about being able to see the R-rated movies on the main screen that faced their backyards), while the city of Maumee, typically, didn’t do anything to help. Considering the historical nature of the building, they shouldn’t have let National Amusements tear it down, but the city didn’t care (it could have been a double-whammy tourist attraction, with the town’s restored indoor theatre). And now, the site has one of those clip-joint “megachurch” scams occupying it. A shame.

The truth: It was RAVE who closed the theater down. It would NEVER reopen again as a theater! What other use can a cinema multiplex that large become these days? RAVE “leased” new complex at Fallen Timbers in 2007/08.

The new owners – Calvary Church remodeled the facility and now it serves a most worthwhile purpose – educating and inspiring people. Something the cinema complex failed to do – only entertaining people and there’s more than plenty of that to go around “these days”.

By the way, Calvary left the “Cinema’s” signage out front; it still serves as a bit of a historic reminder of the building’s former purpose.