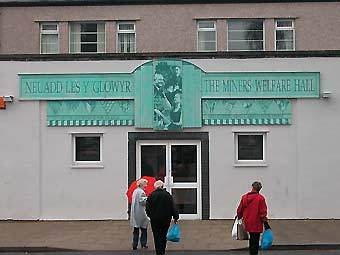 Located 15-miles to the north east of Swansea. The Miners Welfare & Community Hall was previously owned by the National Union of Mineworkers and was known as the Welfare Cinema. Designed by architect Monod T. Seymour of Cardiff it opened in 1934 with 650 seats. It was closed in 1937, and the licence was transferred to the Capitol Cinema in Ystalyfera, with a clause that no films could be screened in the Welfare Hall for the following seven years. The Astoria Cinema, Ystradgynlais, located only 200 yards away, continued as the only cinema in the town. The Welfare Cinema did re-open later and was closed in the 1950’s.

It was taken over by the local Council in the late-1980’s and refurbished as a community arts centre by Powis County Council architects in 1991.