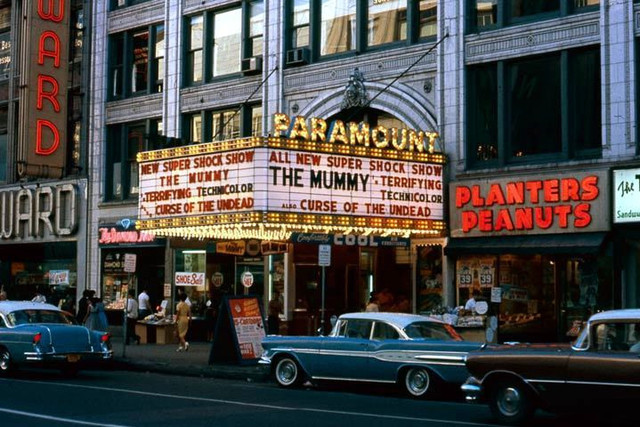 The Temple Theater was opened in 1914. It was remodelled in 1929 to the plans of architect Thomas Lamb and was reopened on December 5, 1929 as the Paramount Theater. There is little information about this theater. It was torn down in 1967 along with its neighbor, the RKO Keith’s Theater, but may have ceased operation a year earlier. Like the Keith’s, the Paramount Theater remained a first-run house until it closed.

Here is a December 23, 1953 ad from the Syracuse Herald Journal:
http://tinyurl.com/7dnp4o

From what I’ve been able to puzzle out from a number of fragments in a long list of sources, a theater called the Temple was built on this site by a William Cahill in 1914, and was designed by a local architect named James A. Randall. In the late 1920s, it was leased to the Schine circuit, and in 1929 it was either remodeled or rebuilt to plans by Thomas Lamb, and became the Paramount.

The office building in front of the theater was called the Cahill Block, and dated from 1913-1914. The Temple Theatre’s auditorium seated about 1,200, so at the very least it had to have been expanded if it was converted into the larger Paramount. At least one source implies, though doesn’t state explicitly, that the Temple was demolished and replaced, while other sources imply, but don’t explicitly state, that the Temple was only remodeled.

I’m hoping somebody will be able to come up with other sources that solve this puzzle. I’ve pretty much exhausted the sources available on the Internet.

Substantial information on Schine’s operations in Syracuse can be found in the 1947 US Supreme Court response to Schine Circuit’s request for a re-hearing (RE: the Federal court’s anti trust decision)

From the court’s summary of evidence and testimony, RKO had operated the Paramount since 1929 and possibly earlier

The Federal court determined the Schine Circuit violated the Sherman Act. Schine operated 132 theaters in six states and the court required 58 be sold.

In Syracuse, the court required an end to the pooling agreement with RKO. But Schine was not required to sell the Eckel, the one theater it owned. Instead Schine was allowed to operate a second first run theater in Syracuse, a deal it completed in 1947.

The court doesn’t identify the second theater. But it had to be the Paramount, which along with the Eckel, were the only Syracuse theaters advertised as Schine’s from the late 1940’s through the mid 1960’s.