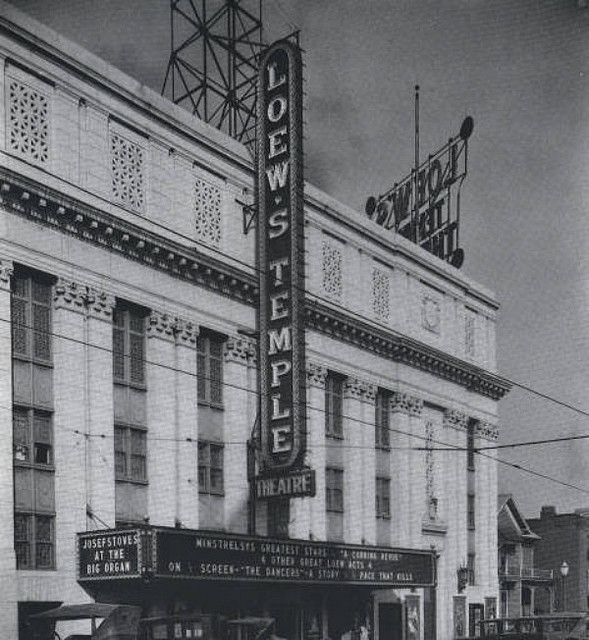 After a remodeling of the 1922 built building, the Loew’s Temple Theatre opened in the Birmingham Masonic Temple auditorium on April 27th, 1925 with Norma Shearer in “Excuse Me” and five acts of vaudeville on the stage.

There is a record of Kilgen organ company installing a 3 manual organ at a Loew’s theatre in Birimingham. The record does not give a date or an opus number. Was this it?

The Birmingham Masonic Temple was completed in 1922. It was designed by architect Eugene H. Knight, according to his entry in a later edition of the AIA Historical Directory of American Architects.

This theatre should probably be listed simply as the Temple Theatre, as Loew’s was not the last operator; Loew’s Temple should be an AKA.

There is a great deal more about the Temple Theatre on this webpage (scan down toward the bottom of the page). The information indicates that the theater was demolished, apparently around 1970, and that it was used more frequently as a venue for live theater than for showing movies in spite of its being operated by both Loew’s and Paramount over the years. Loew’s moved its operations here in 1925 after previously housing them at the Bijou which apparently later became the Pantages.

Can someone please tell me what years John Lampe was orchestra director? He was a very good friend of my father when he lived in Birmingham as a young man. My father was a charter member of the Birmingham Symphony.

We moved to Bham from Houston in the summer of 1954. I remember attending concerts (Birmingham Symphony??) and a road show of “Once upon a Mattress” with Imogene Coca at the Temple. Its movie days were long gone by that time but it was still in use.

I really wish the Temple was standing today. I’ll never understand why Birmingham goes through these “Building Destruction” phases. Within the same month of the Temple’s destruction, we lost our beautiful Birmingham Terminal Station as well. Thankfully, the Alabama Theatre and Lyric Theatre have both been beautifully restored to their former glory…I pray we keep them!