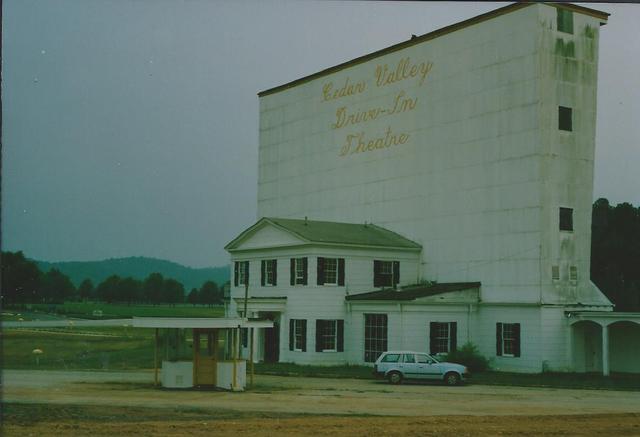 When I did my undergraduate student teaching in 1979 at Georgia School for the Deaf in Cave Spring, I noticed this drive-in was across the highway from Floyd Junior College.

At the time it was showing "adult films" only on the weekends.

I drove by there sometime in the early-1990’s and the whole area had just been leveled.

The Cedar Valley Drive-In had only recently opened when it was featured in an article for the Modern Theatre section of Boxoffice Magazine’s issue of October 1, 1949. The drive-in was designed by the noted Atlanta firm of Tucker & Howell, architects of many theaters in the region.

Photos accompanying the article showed the Southern Colonial style of the buildings which, to my eye, presented a rather alarming contrast with the 60-foot screen tower- as though some bucolic plantation house had inexplicably collided with a boxy Midwestern grain elevator, perhaps carried thither by a tornado.

The Cedar Valley Drive-In could accommodate 500 cars, and featured a landscaped playground, an outdoor seating area for patrons who might enjoy watching movies from beach chairs, and a pair of small artificial lakes flanking the entrance, romantically reflecting the lighted buildings and screen tower by night.

Love the picture. I don’t remember the screen being so close to the highway but like I said in my original post it was almost 30 years ago when I saw the theater.

I took Pictures of the drive in when it was turned into a HAUNTED PALACE for Halloween.Theatre was closed.

The above address will map accurately to the location of the drive-in.

Here is a USGS topo map which notes the location of the drive-in, courtesy of MSRMaps.com.

Sometimes the mapping ability on different web mapping sites is misaligned, and the correct address does not go where it is supposed to be. In those instances, intersections are probably more useful than road numbers. GPS coordinates and aerial photos are best for long-term documentation, since road numbers and road names can change over time.

My point was that the drive-in was located in Rome Georgia at the intersection of Cedartown Highway (27) and Industrial Blvd. SE. No matter what mapping you use the remnants of the drive-in are still there.

Correction: The approximate location for this drive in was 3110 Cedartown Highway. Hardee’s is where the entrance was located.

Does anyone remember the name of the people who owned the theatre. I went to school in Atlanta with a girl named Kay Lamb who if not mistaken parents owned the place. I used to take her home on weekends. My memory has faded a bit in the last 50 years but I do believe this is the theatre where she lived.

The Dec. 2, 1950 issue of Boxoffice ran a one-page story (with pictures) about the Cedar Valley adding a second concession stand at the rear of the viewing field. “Casting about for a solution (to the problem of serving so many patrons) they noticed the neglected stable near the back property line of the ramp area. Some architectural ingenuity, a little carpentry, some paint and display lighting effects … and a second concessions building, in the southern colonial style of the screen tower, blossomed to take care of the overflow from the original unit.”