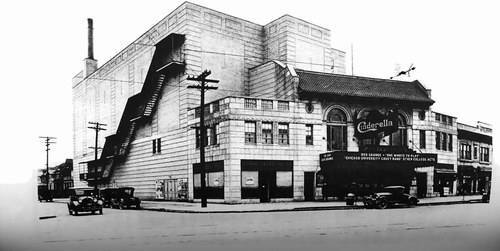 The Cinderalla Theatre was built for J.N. Robinson and opened on January 13, 1924 with Matt Moore in “"Stangers of the Night” on the screen plus dancer Vera Sabina and four acts of vaudeville on the stage. Designed by architect Christian W. Brandt, the nearly 1,900-seat Cinderella Theatre on the East Side of Detroit was one of the larger of the city’s neighborhood houses.

Built in Spanish Colonial style, the Cinderella Theatre made for an impressive sight in its early years along E. Jefferson Avenue with its white terra-cotta facade and red Spanish-tile roofing.

The theatre contained a ‘Mighty’ Wurlitzer organ which was removed from the Cinderella Theatre in 1966. It is now housed in the Music House Museum, near Traverse City.

In 1953 it was sold to United Detroit Theatres, which modernized the Cinderella Theatre, replacing the seating and installing new projection equipment.

After the 1950 Walt Disney film “Cinderella” came out, the side walls of the theater were painted with scenes from that movie.

The Cinderella Theatre was closed in the mid-1970’s, and was demolished just a few years later. The site is still an empty plot of land in 2019.

Some photos of the Cinderella were on the cover of Boxoffice in August 1953. Click on a photo to expand it.
http://tinyurl.com/ybblo68

In 1971, The Cinderella hosted concerts by King Crimson, YES, Emerson, Lake & Palmer, and J. Geils, who recorded their live album “Full House” there.

Opened with some vaudeville acts, and “Strangers of the night”.

The site is still vacant.

Saw my first movie here in 1963 the rerelease of Bambi