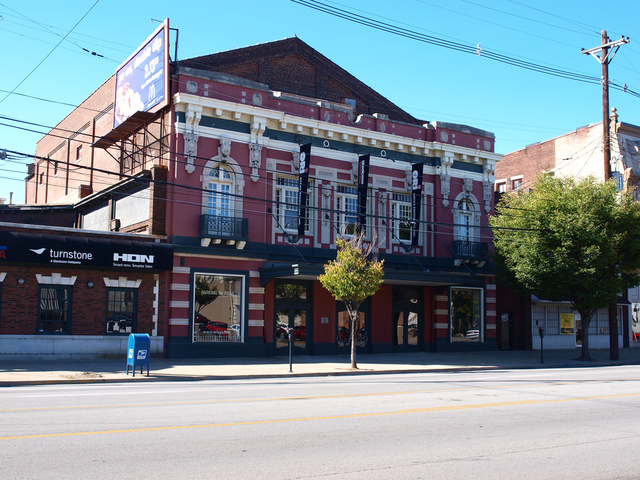 The Broadway Theater was designed by the Louisville architectural firm of Joseph and Joseph. The Broadway Theater opened in May of 1915 and was equipped with a Wurlitzer 2 manual 7 ranks organ. It closed as a movie theater around 1959. It is now an office furniture showroom.

The original East Broadway Theatre opened as a movie house in April, 1908, and originally seated 300. It was the third movie theater in Louisville. According to an article about the house in the July 5, 1913, issue of The Moving Picture World, the house was rebuilt twice over the next few years, expanding its seating capacity first to 500 and then to 700. During its five years of operation, the theater had not missed a single performance despite the alterations to the building, and despite a fire that had destroyed the stage area.

At the time the article was published, architects Joseph & Joseph were working on the plans for another major remodeling which would more than double the size of the theater. The operators had acquired an additional 15 feet of frontage to expand the existing 30-foot wide building.

This is where it gets a bit tricky. I’ve been unable to find any articles explaining the delay in the project, or why the Broadway as completed in 1915 was considerably smaller than the project as planned in 1913. I’m not even sure the new theater was at exactly the same location as the original, which the magazine gave only as Shelby Street and Broadway (the theater today is much closer to Logan Street, at the other end of the block.) Is the existing Broadway Theatre an entirely new building, or is it the final remodeling of the original East Broadway Theatre? We won’t know until additional information surfaces.

In the meantime, here’s a small photo of the original East Broadway, ca.1913. It looks nothing like its successor.

Here’s an article with pictures:
https://brokensidewalk.com/2008/east-broadway-theater-a-hidden-gem/?fbclid=IwAR1UWQDHJyW713y3K_Z2coeRcaBEf6fQ1dF4QtG4yfhCzCiOs3lavRnCbTA