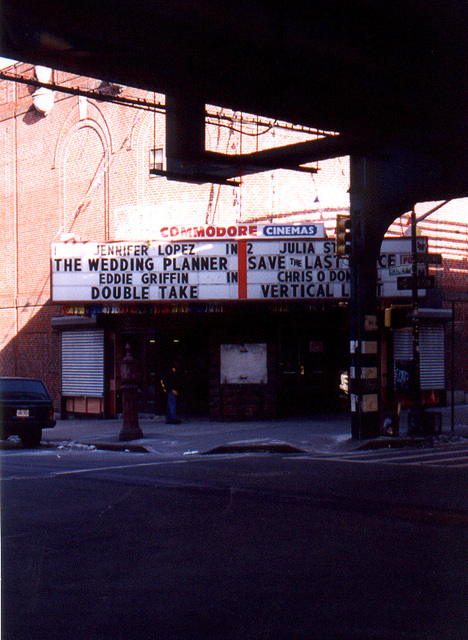 The Commodore Theatre, at the northeast corner of Broadway and Rodney Street in Brooklyn’s Williamsburg section, was a local landmark. It was opened in 1922 and was equipped with a Kimball organ.

The Commodore Theatre was twinned in the 1970’s and was renamed Commodore Cinemas. It was the home of the Williamsburg Brooklyn Film Festival from 1998-2002. It was closed in July of 2002 due to it being purchased by a Jewish organisation who proposed to build a school and cultural center on the site. The building was torn down in January and February 2007 and the site remains an empty plot in 2016.

Wow, Great photos of the Commodore! It was nice to see those “urn” things again….I used to pass them every day for a decade on the J/M trains through there on the el. STILL can’t believe that beautiful building was senselessly torn down. What a shame.

I think this theather was closed and torn down because some members of the community did not want to see their precious neighborhood overrun by hippsters. This could have become a great venue for films, concerts, and a community theater. There was so much potential but it would have clashed with certain people.

As of November 30, 2015 it’s still a huge empty lot. If the Chasidim bought the property they ain’t talking! I asked several walking by and who owned 2 stores … no one could or would answer me?

The sheer stupidity of this continues.

My family rented an apartment in the early 1950’s adjacent to this Commodore theater. The two-story apartment was part of the Synagogue converted into two apartments. Our backyard was a long narrow cemented area laying between the rears of both the Synagogue and Commodore buildings. My sister and I were very little and shared a bedroom on our second floor with only one side window which faced the back of the theater. It only had a shade on it. The lights from the theater would cast shadows of tree limbs from a tree in it’s back property onto our window shade, and when it was windy the shadows of the moving branches were scary to us. Many memories of that home.. the last apartment we lived in before moving out to Long Island and into our first home.

Where on earth might there be photos of the interior?

If you go to Save the Commodore!’s Photostream on Flickr there are some depressing photos of the interior (and exterior) before the demolition.

It really breaks my heart to read all these pages filled with so much interest and love for the Commodore. I’ve read them all before, but it didn’t really hit me when I was a teen. My grandpa co-owned/ managed the theatre as my mother and uncle have already stated. I was a little girl when it happened and I wish so badly my family would have known about this site. I don’t even want to show my grandpa the comments about saving it because I think it would make him really sad. I do want him to see the comments about the nice memories people had of it though so I’ll make a little collage. I think my favorite memory besides playing in every part of that place was dancing on stage before the theatre opened with my cousins. I don’t remember if music played in between movies, but it did before everyone started coming in. We even failed to realize it opened and we were still dancing on stage. I’m sure everyone thought we were just goofy kids because even an adult got on stage for a second to dance!

Are the photos of the interior prior to demolition still available on Flickr?