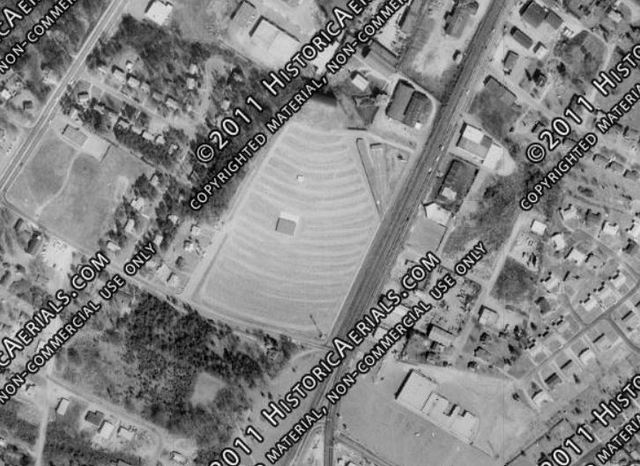 It was renamed the Queen Drive-In on December 21, 1962 screening Elvis Presley in “Girls!, Girls!, Girls!” & James Cagney in “Never Steal Anything Small”. It was closed in the late-1970’s and was demolished to make way for the Queen Park Multi-Cinema, which opened in December 1982. It too has also been demolished.

Here is a newspaper ad for the Queen:
http://tinyurl.com/mwcvh7

It did not open in the 40s. It was built in the early 60s, about one mile north of the old Pineville Road Drive In.The original marquee “needle” still stands.

AS A TEENAGER I WORK AT QUEEN DRIVE-IN. THE MANAGER OF THE DRIVE-IN WAS PHIL MCKINNEY. THE LOT HAD 1000 SPEAKERS.AND QUITE OFTEN WE HAD A FULL HOUSE AND HAD TO SHOW A ANOTHER SHOWING THAT NIGHT. I SAW SEVERAL NIGHTS OF POP CORN SALES OVER 1000 BOXES. THE QUEEN TOWER IS STILL STANDING TODAY. IT WAS OWNED BY A COMPANY CALLED PIEDMONT THEATERS. THE OWNER WENT BY THE NAME OF DOC TIMER (GREAT GUY).

THE MANAGER WAS A GREAT GUY. STOOD 6'9" TALL. AND WE CALLED BOSS MAN OR 69. SOME OF THE CREW WAS BOBBY COGGINS, WESLEY COGGINS, ERNEST GORDON, BILL ELLER,MR MAC,DONNIE LUDWIG, AND MYSELF.

GREW UP AROUND THE THEATRE AND STILL MISS IT TODAY.

The Queen Drive In was built by Howell Theatres, of Smithfield, NC. Rudy Howell was the owner of that company. Phil McKinney, the manager mentioned above, was indeed 6'9" tall, and a very fine man. He lived on the street leading to the exit. Phil hailed from Bakersville, NC. Along with his brother Bob, he worked for many years for Howell Theatres, and then Piedmont Theatres. Piedmont was owned by the above mentioned L L “Doc” Theimer and my father, C C “Bill” Talbert. They were in business together from the early 50s until around 1990.

mhlt are you Mike Talbert? Please respond to:

I also worked for Mr McKinnney when he came to Greenville.

As of Google Street View from March of 2016 the Needle has been removed and there is a sign stating that Office/Retail is coming soon. On Bing Maps Aerial and Birds Eye the needle is still currently visible, but not in their street level view, as of this post.

HistoricAerials.com shows the Pineville Road site with a large drive-in in 1965 but not 1960, suggesting the Queen was built there in between those photos. Topo maps in 1970-78 but not 1965 also show the drive-in there. Its earliest photo was from 1960, and in a quick look along old US 21, I couldn’t find any obvious drive-ins.

This did open as the North 21 Drive-In on August 4th, 1949 with “San Francisco” with Clark Gable. In 1950 it was listed as the Statesville Drive-In and reopened as the Queen Drive-In on December 21st, 1962 with Elvis Presley in “Girls!, Girls!, Girls!”. Grand opening ads uploaded.