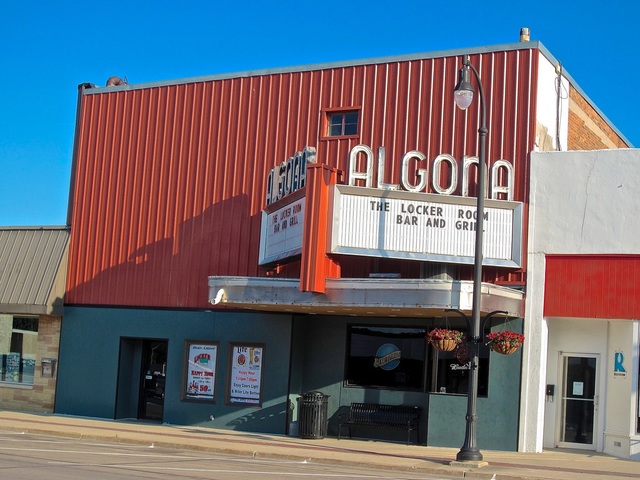 The Algona Theater opened on September 13, 1951 with Doris Day in “On Moonlight Bay”. The original seating capacity was for 750. It was closed in 2005. The former Algona Theater became an indoor golf range and is now a bar & grill.

The Algona Theatre was built for Central States Theatres to replace the second Call Theatre, on the same site, which had been destroyed by fire on December 21, 1950. An earlier Call Theatre (on a different site), which had opened as the Call Opera House in 1892 and was converted to a movie theater in 1916, had also been destroyed by fire, in 1937.

After the 1937 fire the owners of the original Call had leased and then purchased the State Theatre, which had opened in 1936, and renamed it the New Call Theatre. Later it was called simply the Call Theatre. This was the building which burned in 1950.

Boxoffice of July 21, 1951, said that a contest would be held to name the second Call’s replacement, then under construction, and apparently the unimaginative name Algona Theatre won.

The original Call Theatre should have its own Cinema Treasures page. As the Call Opera House it was listed in various issues of Julius Cahn’s theatrical guide with 600 seats, but no address was given.

I don’t know if the State/New Call should have its own page or not. One Boxoffice report soon after the 1950 fire said that the owners were considering the possibility of incorporating some of the old structure’s walls into the new building, but I don’t know if that was done or not. As it took so long to rebuild on the site, perhaps the Algona was an entirely new building.

The building is now home to a bar and grill known as the Locker Room.

Opened With Doris Day and Gordon MacRae in “On Moonlight Bay”, along with a Tom and Jerry cartoon, a Pete Smith speciality, and a newsreel.