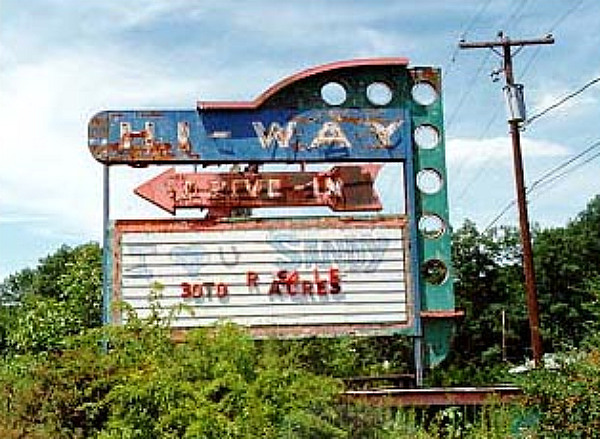 The Hi-Way Drive-In was opened on May 28, 1949 with Yvonne De Carlo in “River Lady”. By 1955 it was operated by Paul Kerrigan & Milgram Theatres. A basic drive-in theater between Ashland and Frackville.

Marquee photo on this site:
http://www.americandrivein.com/states/pa.htm

This is likely the site, due to the shape of the lot….

Marquee could use a little work.

Launched June 2, 1950, the Kerrigans also launched the Harrisburg Drive-In in Lower Paxton at the same time.

A closer address at least on Google is 400 Malones Rd, Ashland, PA. You can still see the outline and the foundation of the projection booth/concession stand.
http://tinyurl.com/ovrq3fj 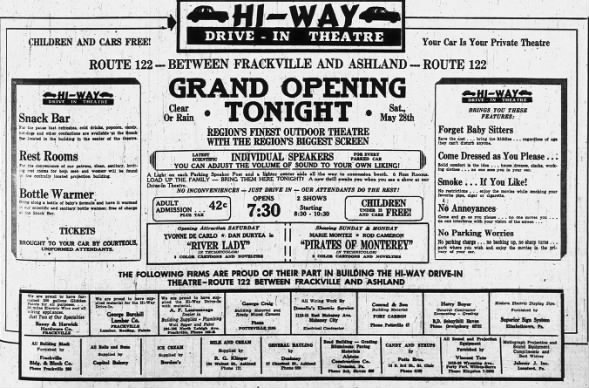 The marquee appears to be long gone.

Also opened with “Pirates of Monterey”. Mostly empty lot. A house has been built at the entranceway, and another house on one of the back corners of the drive-in site.

The address for this theater is 1011 Fountain St. Ashland PA 17921. This points to the residence at the entrance road. Malones is behind the drive in. There was no exit to this street when this theater was opened per historical aerial views. Some ramps are still visible.

The above address is incorrect. Please update.

The Hi-Way, capacity 400, owners Paul Kerrigan, first appeared in the 1949-50 Theatre Catalog. The Catalog, along with all other contemporary drive-in lists, included the drive-in under Frackville because it was about two miles west of that town.

The Hiway was still intact in a 1992 aerial photo, but the screen was gone by 1999. Google Maps lists the location with an Ashland PA address although Ashland is significantly farther away than Frackville.