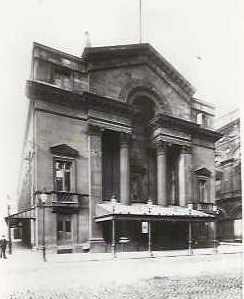 Opened September 29, 1845 and designed by Messrs. Irwin & Chester, the interior was reconstructed by Edward Salomons in 1875. It operated as a live theatre until 1921 when films were introduced, and quickly took over. It was taken over by the J.F. Emery Circuit in 1924 and was the second city cinema to install sound in January 1929. The J.F. Emery Circuit departed from the building in 1930 and it was taken over by the H.D. Moorhouse Circuit.

Major changes were made to the theatre to allow cinema use – the three balconies were removed and replaced by two new balconies and the stage was also moved back and largely incorporated into the auditorium. However the interior was still very rich with a particularly elaborate proscenium arch and the original sumptuous ceiling (with similarities to that of Covent Garden, London) survived.

3D was introduced in 1953 and in 1957, alterations were carried out to the plans of architectural firm Drury & Gomersall. In 1963 the seating capacity was reduced to 1,000 when the Theatre Royal was converted to Manchester’s only Cinerama theatre. A huge screen measuring 65 feet by 28 feet was installed. On 17th December 1965 a simultaneous European Premiere of “Battle of the Bulge” was held here and at the Casino Cinerama Theatre, in London. But, as elsewhere, eventually the lack of new Cinerama films took its toll, and in 1972 it closed and became a bingo hall.

After bingo vacated the building it became a disco named Royale and has recently had a major revamp. As it is a Grade II Listed building, much of the interior survives.

By 2020 the nightclub had closed and the adjacent hotel were using the Theatre Royal for storage.

yeah I found the images…….amazing…thank you.

djmarkoneuk: Are you a Manchester resident? Maybe you could sweet talk the Manchester Evening News into letting us know if they have any archive photos also. I’m eager to get hold of newspaper ads from the 1960’s with the Cinerama logo on.

I do live in Mancheste yes…but I have tried the M.E.N. in the past for other archive articles….the best way would to contact Manchester Central Libraries Archive department.

Ok thanks. Will do. in the meantime there is an article you may be interested in View link
No pictures,however.

Great news!
The Library THeatre Company, one of the countries top theatre company’s is to make the Theatre Royal its new home.
The company will move out of its current home at Manchester Library ad have the Theatre Royal brought up to the standards of a modern producing theatre.

Two 1988 shots here when the building was in a poor state as the Buckingham Bingo Club:–

Amazing how owners can let their grand and glorious buildings go to that sad sorry state in the pics above.
Better days lie ahead for this gem.

When it was converted to be ‘The Theatre Royal Cinerama’ the Cinerama projection screen, rather than being a continuous surface like most screens, was made of hundreds of individual vertical strips of standard, high reflectivity screen material, each about ​22mm wide, with each strip angled to face the audience. This was so as to prevent light scattered from one end of the deeply curved screen from reflecting across and washing out the image on the opposite end. Sadly, this gave the picture a striated appearance. The show also featured a, pre-Dolby, seven-track, directional, surround-sound system, such that sounds always appeared to be coming from their intended source.

The original system involved shooting with three 25mm synchronized cameras sharing a single shutter. This process was later abandoned in favor of a system using a single, anamorphic lens camera and 70mm film. The three cameras were mounted as one unit, set at 48 degrees to each other. The single rotating shutter, in front of the three lenses, assured simultaneous exposure on each of the films. The three angled cameras photographed an image that was not only three times as wide as a standard film but covered 146 degrees of arc, close to the human field of vision, including peripheral. The image was photographed six sprocket holes high, rather than the usual four used in conventional 35 mm processes. The picture was also photographed and projected at 26 frames per second rather than the usual 24, for better persistence overlap.

Cinerama film was originally projected from three separate projection boxes, arranged in the same crisscross pattern as the cameras. There was a visible overlap of the screen images, which was somewhat distracting. Any slight projection vibration resulted in a noticable loss of convergence. The single, anamorphic, 70mm system addressed all the major problems, and the two extra projection boxes were removed. At The Theatre Royal Cinerama I got to see ‘How The West Was Won’ in both systems. They were both equally impressive, but not enough to keep me going back. The main feature was usually preceded by the demonstration film ‘This is Cinerama.’