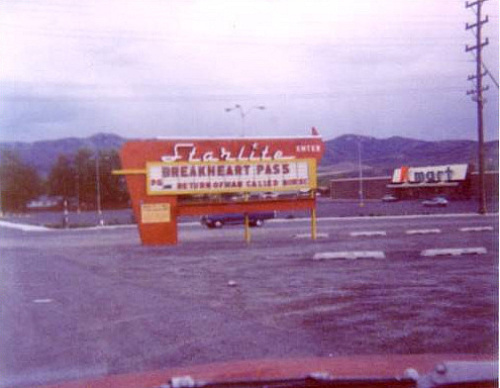 It was to be called the Motor-Vu when the theatre first made news in the Pocatello Idaho State Journal on October 2, 1949. The article said that the $100,000 theatre was scheduled to open next April but may open later in October, depending on weather conditions.

The theatre was being built by Mel Morris, who had 25 years of theatre experience, having operated theatres in American Falls, Aberdeen and the Rialto in Pocatello. He said his son Richard would be the manager of the 650-car theatre, which had a 70' by 70' screen.

At the time there was another drive-in ad in the theatre section just called “Pocatello Drive-In” south on Highway 91.

The Starlite had its grand opening on April 6, 1950 with “Scudda Hoo! Scudda Hay!” and on July 17, they announced the addition of completely paved ramps and parkways.

For the 1952 season, Mel Morris took over the previously mentioned and subsequently closed Pocatello drive-in which was south on Highway 91 and renamed it the Sunset. It opened on April 10, with all new equipment.

Other important dates for the Starlite are:

–In February of 1962, it was announced that they were showing first-run movies and that safe electric heaters were available.

–The Journal announced in August of 1977 that a shopping center would be built on the site of the drive-in.

–The Starlite’s last season was in 1979 when it was sold for redevelopment.

This was in Chubbuck.

Approx. address for this drive-in was 820 West Quinn Road. Where the Carmike 7 stands is the rear of the drive-in.

The Nov. 12, 1949 issue of BoxOffice had a few more details and a different unused name.

POCATELLO – A new ozoner, the Auto Vu Drive-In, has been completed at Pole Line and Quinn road at a cost of $100,000. It is expected to open next April. The new drive-in, which has a capacity of 650 cars, has a screen tower measuring 70x70 feet. Construction was under the direction of Cartwright and Wilson of Salt Lake City, with equipment to come from the Service Theatre Supply Co., which has equipped more than 50 theatres between Denver and Los Angeles in recent months.

Mel Morris of American Falls, Ida., is the principal stockholder of the new venture, which will be managed by Richard M. Morris, now a senior at Idaho State college. The project also will include a playground.