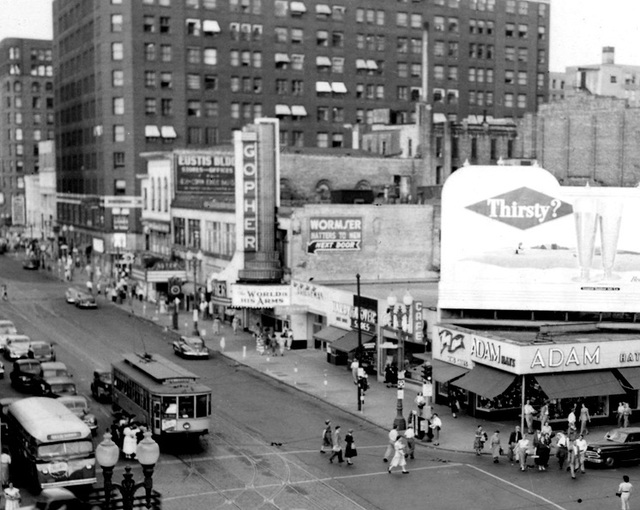 When it opened in 1911, the Grand Theatre, or New Grand Theatre as it was briefly called, was a vaudeville house, but by the 1920’s, was showing movies only. It was part of the F & R circuit. In 1928 the Grand Theatre was taken over by Paramount-Publix and was wired for sound, but by 1936 had closed.

Two years later, it was completely remodeled by architect Jack J. Liebenberg in an Art Moderne style, seating around 1,000, and opening as the Gopher Theatre on October 29, 1938. The name was chosen by a contest, and comes from the University of Minnesota’s Golden Gophers football team.

Unlike its Neo-Classical predecessor, the Gopher Theatre was then-very modern looking. It featured the colors of the University of Minnesota, maroon and gold on its Vitrolite exterior and tall tower-style marquee. The interior was done in shades of white and pink.

Though it was a downtown movie house, it originally never played the big hits, though it did host a 1941 live appearance by Gene Autry which drew a large crowd.

In 1950, the Gopher Theatre was taken over by a new owner, Ted Karatz and his partner Ben Berger, who began a policy of screening first-run films, which continued into the 1970’s.

Maybe they should call it the Grand Gopher.

As The Grand Theatre, the hall had a small Wurlitzer pipe organ installed in 1926. Wurlitzer’s opus 1374 was a style B special with 2 manuals and 5 ranks of pipes. The top of the console is visible in the photo link posted by Lost Memory.

The “Gopher” visible on the postcard on display at the time of this comment is not the theater, it’s a similarly and unrelated café. The theater is technically – but not practically – visible on the card. Both establishments were on the east side of Hennepin; the theater was between 6th and 7th Streets while the café was between 8th and 9th. This card is looking north from 10th.

F & R (Finkelstein and Ruben) did not have the theatre as late as 1949. F & R sold out to Paramount-Publix in 1928 after enjoying a partnership deal with Paramount. Noted Minneapolis theatre architects Liebenberg and Kaplan were hired to remodel this and several Paramount-owned theatres in Minnesota and the Dakotas in the 1930s to the ‘50s. They did the 1938 streamline-style remodeling whereupon the name was changed from Grand to Gopher.

Paramount (subsidiary name Minnesota Amusement Company) ran the Gopher until 1950 as a moveover house, first-run B pictures, or the occasional A picture when the other Paramount theatres were tied up. Paramount’s #1 and #2 houses in downtown Minneapolis were the State and Minnesota (name changed to Radio City in 1944). #3 was the Century and #4 the Lyric. (Paramount also had an interest in the RKO Orpheum in a pooling arrangement but that was dissolved in the early 1940s). Minnesota Amusement also ran the Aster Theatre which was on the same block as the Gopher, and ran first-run B double bills.

The Gopher and Aster were among a few theatres that Paramount was forced to dispose of in the Minneapolis-St. Paul area after the decree. In 1950, Ted Karatz took over the theatres with partner Ben Berger, who was the owner of the Minneapolis Lakers basketball team. Berger had several theatres and was a leader of the North Central wing of the Allied States Association, a theatre operators organization. Berger was instrumental in fighting against film distributors’ block booking, bidding and clearance practices. Berger initiated several lawsuits and testified on behalf of others. He also wrote an autobiography, “Thank You America.”

Berger’s operation of the Gopher immediately sent downtown Minneapolis into bidding wars and made first-run bookings even more competitive. In the 1950’s Berger had the best luck with MGM and Universal, playing several of their films as first-runs that decade.

“Jaws” did play 6 months at the Gopher, up through Christmas Eve. Then it was replaced by “The Hindenburg” (also Universal) which played two months.

To add to the historical confusion, Alexander briefly ran a two-screen X-rated storefront theatre on the opposite side of Hennepin Avenue, called “Gopher 1 & 2” around 1979-1980. Strangely, for a short time in 1980 this twin played some late-run Hollywood pictures at $1 admission.

Posted a 1944 nighttime picture of the Gopher with the Lyric, Pix and State up the street.

Posted a 1951 picture in photos