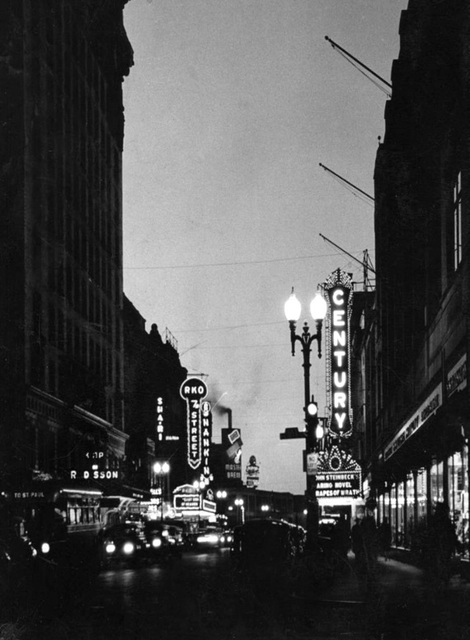 The theatre known best as the Century Theatre originally opened as a 2,000 seat vaudeville house called the Miles Theatre at its opening on December 28, 1908, but it only lasted six years before closing. It was designed by the architectural firm Kees & Colburn.

In 1915, almost entirely rebuilt, it reopened as the Garrick Theatre, and was far more elegant than the Miles Theatre had been. Not only did it feature vaudeville and other live stage shows, but motion pictures as well.

In 1920, it was acquired by the Finkelstein & Ruben circuit. The Garrick Theatre remained in business until 1928, when it was closed once more.

In 1929, the architectural firm Liebenberg & Kaplan drew plans for a new theater. The Century Theatre was built in the shell of the Garrick Theatre, and was even more ornate, and was proclaimed the most up-to-date movie house west of Chicago when it opened in September 29, 1929. It sat a little over 1,600.

Its vertical marquee rose over 25 feet above the facade, and its marquee was ablaze with close to 4,500 lightbulbs. The interior was a stylish blend of French Renaissance and Art Deco.

However, the Depression hurt business at the Century Theatre, and it closed in 1931. It was open and closed a number of times more between 1931 and 1935.

For the remainder of the 1930’s and 1940’s, it played mostly second-run films which has previously had long runs at larger dowtown houses, as well as the occasional road show.

Again, the theatre closed in 1954, for a massive remodeling project which transformed it into the Century Cinerama. When it reopened, the Century Theatre would become only the eleventh theatre in the US to show Cinerama films. The Century Theatre was again gutted, and given a modern interior, and its seating again reduced, to 1,145. Its Cinerama screen was 72 by 28 feet. The first picture, "This Is Cinerama" was a tremendous hit, and soon rivaled the State Fair as a tourist attraction! It was estimated that the Century Cinerama brought millions to the Twin Cities' economy during the 1950’s.

Several weeks later, a fire broke out in the Century Theatre, and gutted it. It was demolished in February, 1965.

The September 28, 1929, issue of the trade publication Movie Age said that the Century Theatre had been opened by the Publix circuit the previous Saturday.

The article said that the plans for the rebuilding of the former Garrick Theatre had been done by the architectural firm of Lieberman & Kaplan, but they must have meant Liebenberg & Kaplan.

Future home of the Miles Theatre (about 1908):
View link

The Miles Hippodrome (about 1910):
View link

The photos linked in the previous comment show that elements of the original facade of the Miles Theatre survived through both of the major remodelings of the building.

A photo of the Miles Theatre from the trade journal The Western Architect, issue of December, 1908, attributes the design of the Miles to the architectural firm of Kees & Colburn, also architects of the Loring, Orpheum, and Pantages theaters in Minneapolis.

A later page of the magazine displays the original floor plan of the Miles Tehatre.

It’s been nearly half a century since the Century screened its last film, “The Unsinkable Molly Brown”, but it hasn’t been forgotten. During those five decades, the theatre burned down, an office building rose and was later razed to make way for City Centre, a downtown shopping mall which never really took off. But now the Hennepin Ave Theatre Trust, the folks who run the State, Orpheum and Pantages in downtown Minneapolis, are opeing the “New Century”. Located in inside City Centre, it will be a 300 seat, black box theatre. Although smaller and less grand than the old cinema, it’s good that the memory of the Century will live on in Minneapolis.

The Cinerama installation at the Century was highly successful. Orchestra and front half of the balcony were very effective for audience being put “in the picture”. The theatre’s moderate size was a factor. When I saw Cinerama in Chicago at the cavernous Palace, it was less sensational despite a larger screen.

All the photos show the address to be 40 S. 7th Street.

December 28, 1908 grand opening ad as Miles in the photo section.