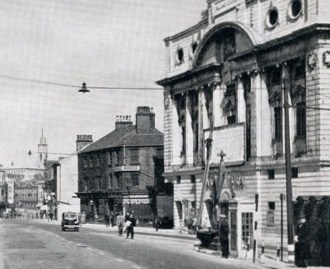 The Alhambra Theatre stood in Doncaster Road at the corner with New Street, on the eastern approach to Barnsley town centre. Designed by architect Percy Archibald Hinchcliffe, the Alhambra Theatre was Barnsley’s third live theatre and opened with a concert on 1st October 1915 by Countess Fitzwilliam, from the Fitzwilliam Estate at Wentworth Woodhouse close to Barnsley.

A brick building with stone façade and columns with windows between each column. A large curved pediment over a central plaque was placed above the columns with two round windows on either side of this and the name ‘Alhambra’ carved in stone along the top of the building. As the Alhambra Theatre was built originally as a variety house, the stage was somewhat shallow at only 20 feet deep. The owners were the Alhambra Theatre (Barnsley) Ltd.

It remained a live theatre for just under ten years and closed as such on 6th June 1925 and converted to cinema use opening with the film “Koenigsmark”. In 1930 Federated Estates of Regent Street, London took over the cinema and installed Western Electric(WE) sound. On 5th June 1938 the Alhambra Theatre was taken over by the Oscar Deutsch owned chain of Odeon Theatres Ltd., but by an agreement in the sale was never renamed the Odeon, keeping its Alhambra name. It later advertised as ‘An Odeon Theatre’ in press adverts. The Rank Organisation closed the Alhambra Theatre on 26th November 1960 with the film “The Entertainer” starring Laurence Olivier supported by “A Hill in Korea”. It stood empty for eight years and was then re-opened on 13th June 1968 as a Top Rank Bingo Club. It was closed in 1976.

I have the original archtitects drawings for this theatre along with several dozen others which PA Hinchcliff designed. Any suggestions who could make best use of these? Also Correspondence between the Architect and Fred Foster of Notts and the Leeds Scenic Studio who painted the murals on the walls of this and other theatres and cinemas in the North of England Circa 1920 -30’s

Many Thanks steeliebobs. If you wish to donate them, the “Cinema Theatre Association:http://www.cinema-theatre.org.uk/ would give them a good home. Go to ‘Archive’ for contact details.

An interesting footnote to this article is that this site will once again be the Alhamba cinema. The shopping centre which opened on this site in 1990 is planning a major expansion including a multiplex cinema on the roof, more or less on the spot of the old Alhambra.