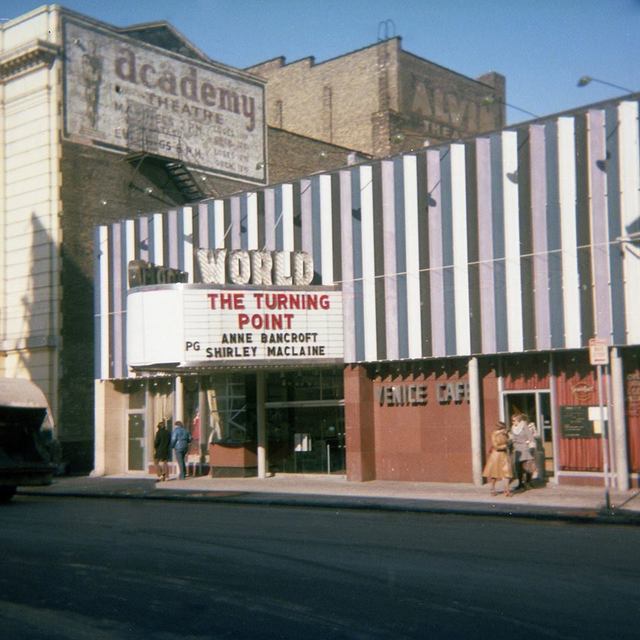 In the late-1940’s, it was modernized, both inside and out, and seating was increased to 461 with the enlargement of the balcony.

Starting in 1949, with "Take Me Out to the Ballgame", it became known as the place to see the latest MGM musicals, into the mid-1950’s.

When Ted Mann acquired the World Theatre in 1955, it was once more rebuilt, in Modernist style, at the cost of over $150,000. The architectural firm Liebenbreg & Kaplan carried out the rebuild.

The World Theatre remained a popular venue for first-class films for decades, including its longest run ever, when "The Graduate" ran for over a year beginning in 1967, and was also was its highest-grossing film.

In 1983, the World Theatre was closed, and torn down a few years later.

Before it was remodeled in 1933, the lobby fronted on Hennepin Avenue. Later, during Ted Mann’s tenure, the balcony was remodeled into his offices and screening room, with an entrance on 7th. Street.

Before it was remodeled in 1933, the lobby fronted on Hennepin Avenue. Later, during Ted Mann’s tenure, the balcony was remodeled into his offices and screening room, with an entrance on 7th. Street.

1977 photo added, credit William Burleson, who worked there at the time.

The WORLD Theater letters were removed in the middle of the night by Tom H. and brought to First Ave., they were used in a downtown holiday decorating contest, which the Ave. lost to Glam Slam (I think).

They eventually disappeared from the Ave. when the storage room was gutted for the bar behind the ladies restroom.

I moved to Minneapolis in 1966. The World began its showings at 10:00 am. I could squeeze in an early movie and still make my afternoon classes at the U. The concession lady who sold popcorn always flexed the box so I’d get an extra generous helping.

“The Graduate” opened here fifty years ago today. The film went on to play a venue record 57 weeks. And here’s a new retrospective article which includes some exhibition history (and other) details to commemorate the classic film’s golden anniversary.