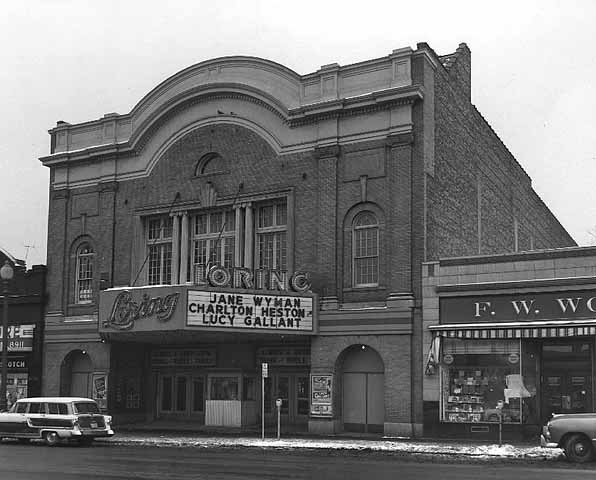 When the Loring Theatre opened December 4, 1920, it was one of the grandest of the smaller downtown theatres in Minneapolis, dripping with marble, gilding and crystal. Its large screen was flanked by sets of tall marble pillars, and the auditorium ceiling was topped with a large dome. It had all the features of the largest downtown houses, but seated only 1,116.

Not only was it beautiful, but it had the most up to date projection equipment, "refrigerated air" and a pipe organ and house orchestra.

The Loring Theatre was said to cost well over a quarter million dollars to build, and unlike many of its neighbors, which suffered (or went belly-up) during the Depression years, the theatre remained in business and quite a popular venue. It was renovated in 1930 by architects Liebenberg & Kaplan, who added some Art Deco style details.

However, what did affect the Loring Theatre was the dawn of the TV age, and it rapidly fell into decline starting in the 1950’s. It closed in 1958.

It quickly reopened as a church, the Minneapolis Evanglistic Auditorium, as it remained for over two decades.

In the 1980’s, the Loring Theatre was used as a legitimate playhouse, and most recently, has been transformed into the Music Box Theatre, its interior made to resemble a Victorian-era music hall. It presents musical stage shows as well as plays and concerts. In January 2010, it was again re-named Loring Theatre.

The Loring Theatre was designed by the firm of Kees & Colburn. Here is a page about it from the City of Minneapolis web site.

The Music Box has returned to its original name, The Loring.

I was unable to find this house with Cinema Treasures' internal search using just the name Loring. I think it’s because the words Loring and Theatre are run together in the page title. If you run them together in the search box, search finds the page, but it would be better to separate the words.

This opened on December 4th, 1920. Grand opening ad in the photo section.