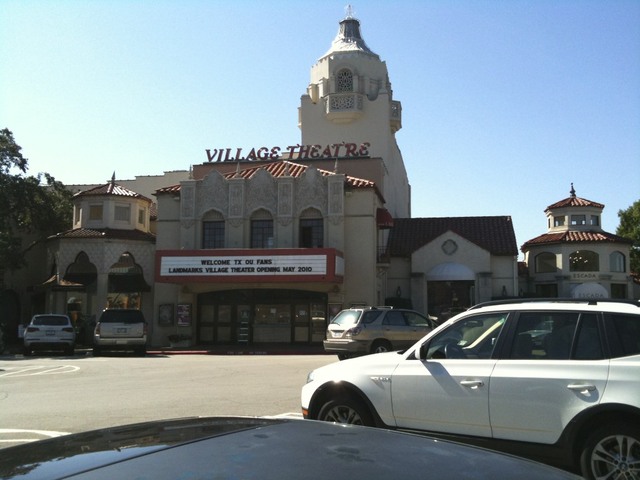 Located in the Highland Park Shopping Village, at the intersection of Mockingbird Parkway and Douglas Avenue. The Village Theatre opened by Karl Hoblitzell in November 1935 with 1,350 seats. By 1941 it was operated by Paramount Pictures Inc. through their subsidiary Hoblitzell & O'Donnell. It was twinned in 1976. It was closed in July 1986.

In 1987 the interior was gutted to create a 4-screen theatre which was opened by AMC on March 11, 1988. Seating was provided for 600. In 2001 it was taken over by Regent Theatres. It was closed in August 2009 and reopened in May 2010 by Twomey Concepts LLC. Now with three screens plus two private screening rooms and a bar, all screens have stadium seating and digital projection. It was closed on March 16, 2020 due to the Covid-19 pandemic. The operators made remarks it would reopen, but by October 2021, it remained shuttered.

One of the original murals is hung at the TXCN headquarters downtown and all survived.

The Highland Park Spanish Village Shopping Center was an ambitious and many say the second ever shopping center created in the United States. The $1.5 million center started construction in 1930 with a theater in its original planning. In May of 1931, the Hughes-Franklin Theatre Circuit led by Harold B. Franklin and Howard Hughes which had built the Texas Theater drew up a 1,400 screen theater at a cost of $250,000 that was to be that theater. However, Franklin left the company and plans dissolved.

The Village shopping center opened in 1933 without a theater. Those same plans were picked up by Flippen-Prather Stores which leased the theater to the Interstate Theater Circuit which did cost-cutting reducing the 1,400 seat theater to a $150,000 house. The theater’s Spanish architectural style perfectly matched the shopping center’s design. Inside, the lobby had large murals depicting the history of Texas to present by James Buchanan “Buck” Winn Jr. Blue walls and ceilings, terrazo floor and heavy oak doors with leather panels gave the interior its look at its grand opening on November 15, 1935 with the film, “The Dark Angel.”

Interstate ran the theater as a second-run suburban and did a remodel of the theater reducing seat count to 1,164 wider seats and new wall treatments. It repositioned the theater as a first-run house in 1957. That policy continued into 1960 when it played a Disney film that was outgrossing the larger downtown houses. Interstate ran family-oriented fare to huge profits throughout the 1960s. A 1966 fire ruined the theater’s original spire and the building now in the hands of Henry S. Miller spent $85,000 to make the repairs.

Interstate successfully ran the theater for 40 years but decided not to renew its lease and dropped the theater. In 1976, the B&B Circuit took over under Fred Beirsdorf and Harold Brooks. They made two decisions that extended the Village’s life: 1) they twinned the theater creating a balcony screen and a main screen and 2) they added midnight shows in 1976 starting with “Gimme Shelter.” The latter moved proved beneficial because the theater booked “The Rocky Horror Picture Show” in 1977. Locals protested to the theater owners and Henry S. Miller about the types that were coming to the show to no avail. “The Rocky Horror Picture Show” ran a nine year engagement into the summer of 1986, unprecedented to that point. B&B had declared bankruptcy in 1985 and there was some finger pointing over the closing of the Village in July 1986. Rumor had it that the days of theatrical were over as the theater would become retail space and that the relator were to blame; others pointed the other direction.

Things settled down in 1987, AMC created a four-plex in the Village signing a lease with Henry S. Miller with one stipulation: there would be no showing of “The Rocky Horror Picture Show.” All screens were up a short escalator flight up through the concession area with the largest screen now 250 seats and the other three had 110 and 120 seats for 600 total seats. AMC successfully operated it for more than 13 years.

Regent Entertainment took over when AMC left the Village in 2001. Operating one of the most unusual venues in Dallas film history, the Regent Village set a box office mark that was seen as quite remarkable when the film Zzyzx Road took in just $30 during a run in 2006 made worse by refunding of $10 to two people who had worked on the film. Regent played many Dallas exclusives that either played nowhere else in the United States or at just its Regent screen in Los Angeles. For independent film lovers, the Regent offered an eclectic mix along with general first-run fare. On its last day in 2009, you could choose to see a film called $9.99 or The Hangover.

When the Regent closed in 2009, the shopping center was under new ownership and there was concern that the theater might not continue. But the owners found a new operator and the theater was gutted and reopened Dec. 18, 2010 by Twomey Concepts. As of the 2010s, Twomey operated the theater as a high end restaurant/bar with screens and viewing lounges mixing predominately family fare with some independent films.

To be clear, nothing of the original interior remains in place. The theater was completely gutted, top to bottom. The four conventional auditoriums on the second level are architecturally on par with just about every mall multiplex designed between the late 1970s and early 1980s. It is a rather basic venue at best and a real shame nothing could have been done to keep the place intact. Still, it does have a nice exterior.

Thanks for the extensive history on the Village Theater. I saw The Natural at this theater in 1983 in the converted balcony theater. On my way out I peaked into the main auditorium which was still in original form at the time, it was exquisitely 1930s and had a great feel.

It was a real loss that this theater was gutted and its original architecture lost, but at least it can be said that people have been enjoying cinema in this building for nearly 80 years, that’s quite a run.

Obviously, the theater’s spanish mission architecture was inspired by architect S. Charles Lee who designed such theaters all over Southern California. In fact, this Dallas theater is similar in many, many ways to the Village Fox in Westwood next to UCLA, which was built in 1930. Check out its photos on this site to see the resemblance.

The value of theaters like the Village, when preserved in their original state, is immense. They provide a sense of character to a community that no multiplex will ever provide, no matter how fancy or large. Just tonight, I saw a showing of Frozen at the El Capitan in Hollywood, an incredibly beautiful movie palace that is leased and operated by Disney. The theater was as much an entertainment as the movie. See photos of it too on this site.

Circa 1960 photo added courtesy of the AmeriCar The Beautiful Facebook page.

OH hell – this is where I got auctioned off for my first RHPS viewing – WHAT a great theater and what a great memory! Very glad this movie house is still operating. A real treasure.

“In 1934, Karl Hoblitzelle set out to build his first-ever luxury suburban theatre. While the façade was designed to perfectly complement the center’s Spanish architecture, a spire was created to represent a Moorish tent. Boasting 1,350 seats with hand-painted murals depicting the history of Texas, the interior exuded extravagance with textiles like the terrazzo floor and heavy oak doors. Eight decades and counting, the theatre is still showing the most acclaimed films for all generations to enjoy, and remains an integral part of our community.”

The Village Theatre closed on March 16, 2020 due to the COVID-19 pandemic. The operators believed that they would reopen and move “Onward” harkening the venue’s final new film bookings entitled, “Onward” and “I Still Believe.” At the 10th year of the lease came and went along with the village’s 85th Anniversary, the theater’s phone was disconnected and the venue did not show any signs of reopening.

No posts had been placed in social media since the March 2020 closure leading movie lovers to say, “I No Longer Believe…” that the lightly-attended yet venerable movie location was reopening. The Village Theatre clientele was forced to move onward for their moviegoing.